As Kazakhstan ends its fourth week since the mass vaccination campaign began, more than 20,000 people have received their first dose of the vaccine, reports a Strategy2050.kz correspondent. 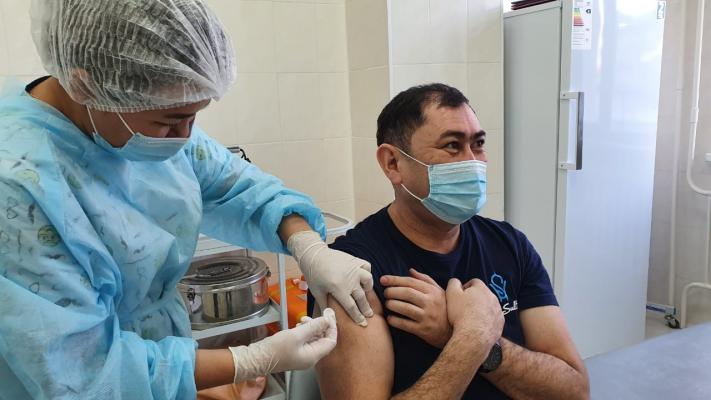 Kazakhstan launched its vaccination drive on February 1, and 20,157 people have been vaccinated with the first dose since then and 2,137 people received the second dose. No severe side effects were reported.

“I would like to remind you that the protective effect of vaccination, that is the production of antibodies to the coronavirus, begins 12 to 14 days after the first dose is injected. In order to ensure full immunity, a full course of vaccination consisting of two components injected within a 21-day interval is required. The vaccine induces an immune response in the body for one and half months after completion of the vaccination course, so preventive measures must be observed by the vaccinated person,” said Kazakh Vice Healthcare Minister Yerlan Kiyasov at a press briefing on February 24.

Starting February 22, Kazakhstan began vaccination with a second dose of the Russian Sputnik V Vaccine. Vice Healthcare Ministers Yerlan Kiyasov and Azhar Giniyat received their second dose the same day at a No. 6 polyclinic in Nur-Sultan. They said they had no complaints and both felt well.

In the Kazakh capital of Nur-Sultan, 6,300 people are to be vaccinated in the first stage.

“Of 6,300 people in the first group, 1,980 have been immunized so far. No side effects or implications were reported. (...) The vaccine generates an immune response in the body within one and half months after a full course of vaccination, so people who received the vaccine should continue to observe preventive measures,” said Nur-Sultan city healthcare department head Timur Muratov at a press briefing on February 19.

He received his second dose on February 22 and said he felt weakness and that his fear to contract Covid is bigger than receive a vaccine.

She said all other groups of the population are expected to start receiving a vaccine approximately in May.

Production of Russian vaccine in Kazakhstan

Currently, the Russian vaccine is produced at a Karaganda-based pharmaceutical plant that plans to deliver 90,000 doses in February, 150,000 doses in March, and 600,000 doses from April to June, based on the agreement with the Russian Direct Investment Fund, a Russian sovereign wealth fund that manages Sputnik V distribution.

"A working group was set up by the healthcare ministry, which included the heads of relevant departments at the ministry, Russian Direct Investment Fund, and Karaganda pharmaceutical plant specialists. All issues were discussed daily. Technology transfer, preparation of production, and training of personnel were carried out in a short span of time. Today we are launching a full-scale production of Sputnik V in Kazakhstan,” said Kazakh Healthcare Minister Alexey Tsoy visiting the plant on February 23.

Russia’s vaccine has so far been approved for use in 37 countries. Among the latest countries to approve the vaccine were Ghana, Mexico, Armenia, and Tunisia.

Giniyat said the epidemiological situation has stabilized in Kazakhstan.

"Many of our citizens are already dealing with their daily business and have even forgotten about the infection. However, due to the spread of infection in the country, as well as the registration of 700 to 800 cases daily, to stop the spread of infection, mass vaccination is being carried out in many countries today," said Giniyat after she received her second dose of vaccine.

According to the ministry’s regularly updated matrix of epidemiological situation, no region is currently in a high risk red zone. Akmola, Atyrau, Pavlodar, Kostanai, West Kazakhstan, and the city of Nur-Sultan are in a moderate risk yellow zone. All other regions remain in the green zone.

On February 24, the interdepartmental commission on the fight against coronavirus made a decision to ease restrictions in regions with the improved epidemiological situation. According to the decision, regions that will sustain in the low-risk green zone for seven days will allow citizens to gather for funeral receptions, Friday prayers at mosques, and sports events, but with occupancy not exceeding 30 percent.

Regions remaining in a moderate risk yellow zone for a week will be able to open trade malls and closed-door markets on Sundays.

From March 1, the commission also allowed combined education for schoolchildren from grades 1 to 5, and from grades 1 to 7 in international schools, except for Mangistau, Kostanay, and Zhambyl regions, where the monitoring inspection revealed the largest number of violations of the sanitary and epidemiological regime in educational organizations.

Nearly a year into a pandemic, the countries are advancing in their vaccination efforts, though with different approaches. More than 221 million doses have so far been administered worldwide.

The United States surpassed 500,000 deaths from coronavirus this week. United States President Joe Biden addressed the country saying “we can't accept such a cruel fate, we have to resist becoming numb to the sorrow.” Biden and Vice President Kamala Harris observed a moment of silence to commemorate the people who died of coronavirus.

The United States has the highest death toll so far, followed by Brazil and Mexico.

“The number of new COVID-19 cases reported to CDC each day continues to decrease, but cases remain high. As of Feb. 22, the 7-day average of new cases is 64,148,” wrote the Center for Disease Control, a U.S. national public health institute, on Twitter.

The United States has so far administered 68,274,117 doses. The CDC said on Thursday 46,074,392 people have received at least one dose, and 21,555,117 were fully vaccinated, representing 6.5 percent in the country of 328 million. Two vaccines - Pfizer-BioNTech and Moderna - passed an emergency approval in the United States.

After his inauguration in January, Biden promised the country to administer 100 million vaccines by his 100th day in the presidential office.

The United Kingdom has been the first country to kick off vaccination in December 2020. Vaccination moved onto a second phase with the first groups getting their first dose of vaccine by mid-February. They include people aged 70 and older, and people who are clinically extremely vulnerable as well as frontline health and social care workers.

The country’s Joint Committee on Vaccination and Immunisation (JCVI) includes people having cancer, severe respiratory conditions, people on immunosuppression therapies, among others, in an extremely clinically vulnerable group.

Now the second phase will cover people aged 65 and over, as well as clinically vulnerable. The United Kingdom uses Pfizer-BioNTech and AstraZeneca vaccines.

“We are aiming to offer a jab to all adults aged 50 or older and those who are at higher risk due to underlying health conditions by 15 April and every adult by the end of July,” wrote U.K. Prime Minister Boris Johnson on Twitter.

As vaccination moves forward, the United Kingdom announced it would steadily ease the restrictions, including allowing exercise and recreation outdoors, funerals (30 people maximum), and weddings (6 people maximum). Schools are set to reopen on March 8, and the United Kingdom adopted a new £700 million package to help teachers as they support their students returning to school.

“All the evidence shows that schools are safe and the risk posed to children by COVID is vanishingly small. But to offer even greater reassurance, we are introducing twice-weekly testing of secondary school and college pupils and asking them to wear face coverings for the rest of this term,” said Johnson in a video message published on social media.

The European Union leaders had a virtual meeting on February 25 to discuss the pandemic and vaccination strategy.

The union has approved three COVID-19 vaccines so far - BioNTech-Pfizer, Moderna, and AstraZeneca.

More than 29 million doses have been administered in the EU, or 8 percent of the adult population, said EU Commission President Ursula von der Leyen during the meeting.

“By Sunday, the end of this week, more than fifty million doses of vaccines will have been delivered to the EU. (...) To continue increasing the speed of our vaccination effort, everyone has to play a role, so we are working with companies to ramp up production and address bottlenecks in the supply,” she told the meeting, noting their efforts to launch new productions on the EU territory. At the moment, 41 industrial sites contribute to vaccine production.

She also said the EU will double its support to the COVAX program aimed at ensuring equal access to vaccines and gear their development and production, to 1 billion euros.