On December 1, Kazakhstan celebrates the Day of the First President to honor the contribution of First President Nursultan Nazarbayev in the country’s making and development. Strategy2050.kz offers you to look through these years and the major decisions made by Nazarbayev that turned Kazakhstan into what it is today. 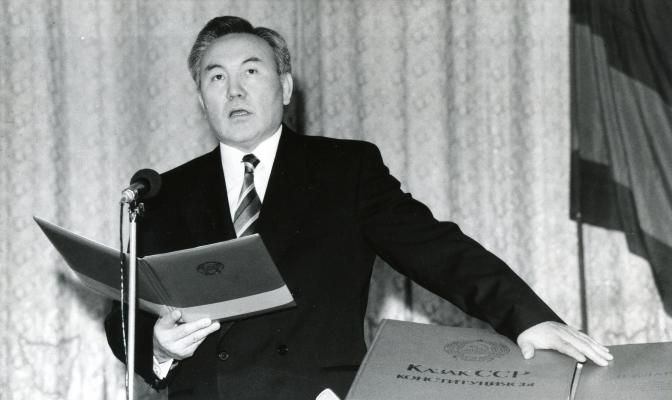 December 1 marks the day when Kazakhstan elected its first leader – Nursultan Nazarbayev – by a popular vote in the country’s first-ever presidential election who served in the office until his resignation in March 2019. The holiday is commemorated annually since 2012. 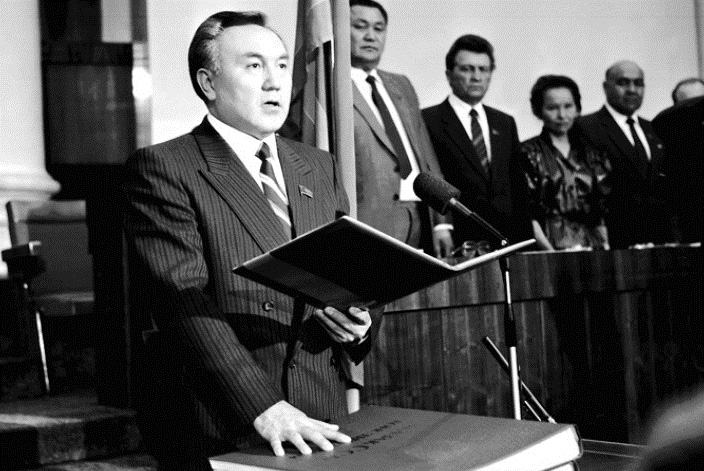 Despite his resignation, Nazarbayev continues to play a significant role in the country’s political and economic life. He travels throughout the world representing the nation and maintaining contact with foreign leaders.

Below are the major decisions made by Nazarbayev over nearly 30 years in the office:

When the Soviet Union collapsed, Kazakhstan inherited the world’s fourth-largest nuclear arsenal in the world in terms of capacity. But it voluntarily renounced it for the sake of world peace. Nazarbayev signed the decree to close the Semipalatinsk nuclear test site on August 29, 1991. The site saw nearly 500 nuclear tests since 1949 causing damage to the health and lives of thousands of people. The human consequences are horrific as nearly 1.5 million suffe4red from the tests and still continue to bear the consequences.

Independence is a sacred value of every country and something that countries need to cherish. Kazakhstan gained independence on December 16, 1991, and through all the hardships and difficulties, the country has become a respected member of the international community and has supported its economic development and growth over the years. 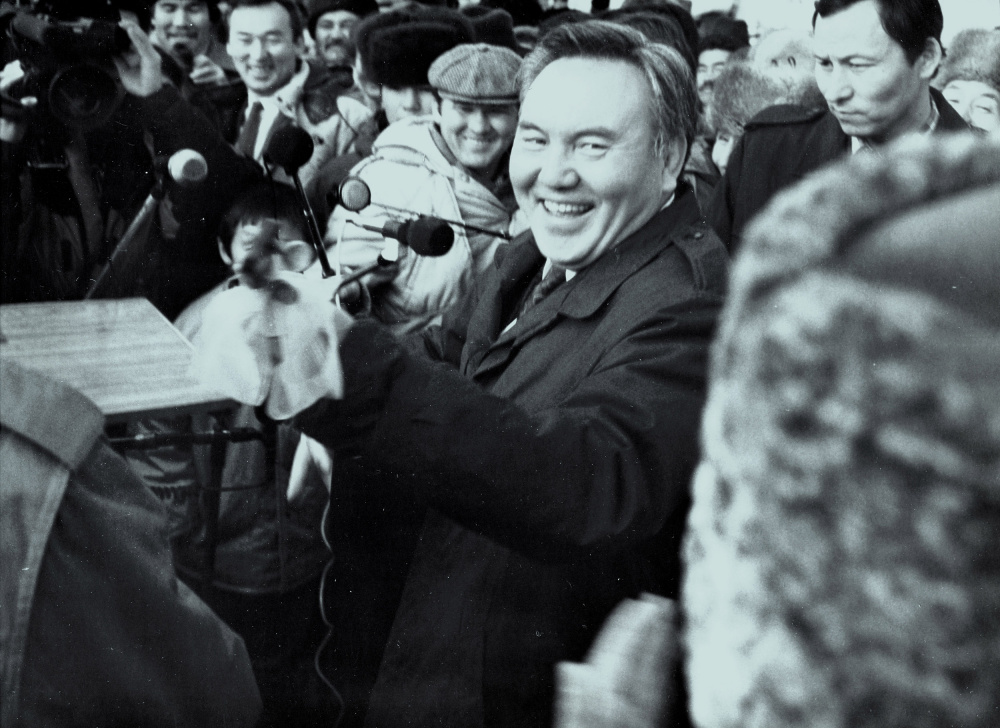 Multilateral cooperation has been a priority in Kazakhstan’s foreign policy carried out by Nazarbayev. On January 2, 1992, Kazakhstan became a member of OSCE and on March 2, Kazakhstan joined the UN. .

Relocating the capital from Almaty to then Astana is considered among the major decisions of Nazarbayev.

The capital is considered to be a brainchild of Nazarbayev who put tremendous resources and efforts into the making of the new capital trying to convince politicians that it was the right decision. Though seen by many as a controversial move at first, the years have proved the rightness of the decision. Nur-Sultan is now one of the rapidly growing cities in Central Asia and the Commonwealth of Independent States with strong economic growth.

Over the years, the city turned from a provincial town to a modern city with emerging urban planning and futuristic architecture. The capital has become the hallmark of sovereign Kazakhstan that sets the tone and pace of life for the entire country and that has defined the entire course of the country's development since independence.

The Assembly of People of Kazakhstan

Nazarbayev established the Assembly of People of Kazakhstan on March 1, 1995, as an important element of the political system to ensure the interests of all ethnic groups residing in Kazakhstan are protected. 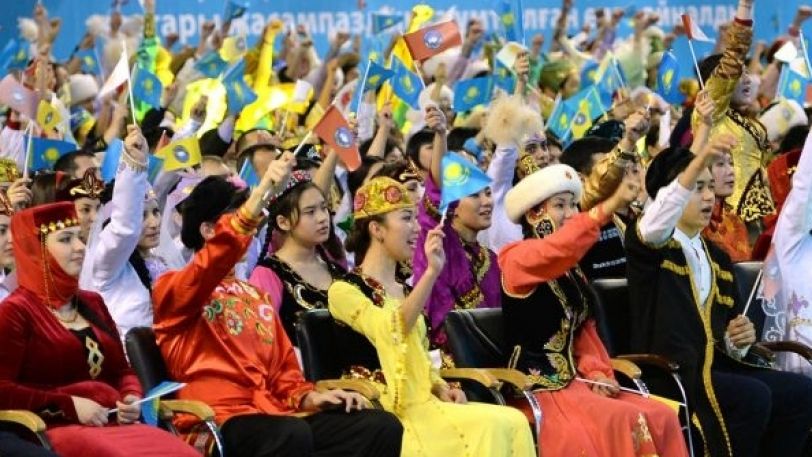 The idea to establish such an institution was announced by Nazarbayev in 1992 at the first Forum of People of Kazakhstan. Among other goals, the Assembly is aimed at implementing state national policy, ensuring social and political stability in the country, and improving the efficiency of cooperation between state institutions and civil society in interethnic relations.

The Assembly is now a constitutional body headed by Chair - the President of Kazakhstan Kassym-Jomart Tokayev.

The first census of Kazakhstan after independence was conducted between February 25 and March 4, 1999. The population of Kazakhstan comprised 14.9 million, a decrease of 7.7 percent compared to the data from the 1989 Soviet census.

The First CICA (The Conference on Interaction and Confidence-Building Measures in Asia) Summit took place on June 4, 2002, in Almaty. The summit adopted the most important founding document of CICA - the Almaty Act - which is the statute of CICA. 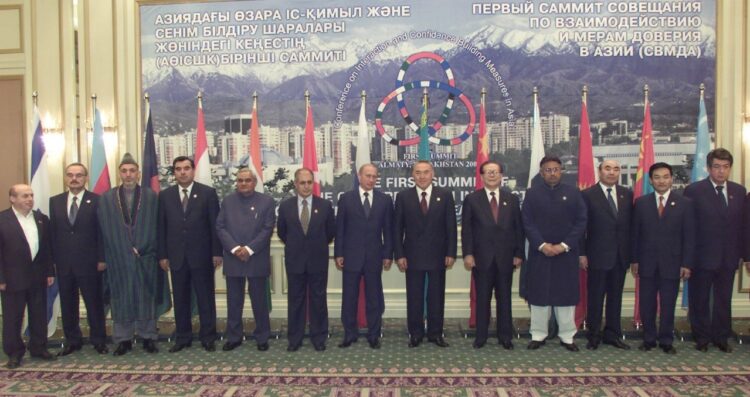 The idea of convening CICA was first voiced by Nursultan Nazarbayev at the 47th Session of the UN General Assembly on October 5, 1992. Nazarbayev stressed that the essence of the initiative was the desire to renew previously unsuccessful attempts to create an effective and universal structure to ensure security on the Asian continent, where, in contrast to other regions of the world, such a mechanism has not yet been formed.

First Congress of Leaders of World and Traditional Religions

On September 23-24, 2003, the Kazakh capital hosted the first Congress of the Leaders of World and Traditional Religions. The congress has been held regularly since then and is recognized as an effective platform for interfaith and inter-civilization dialogue. 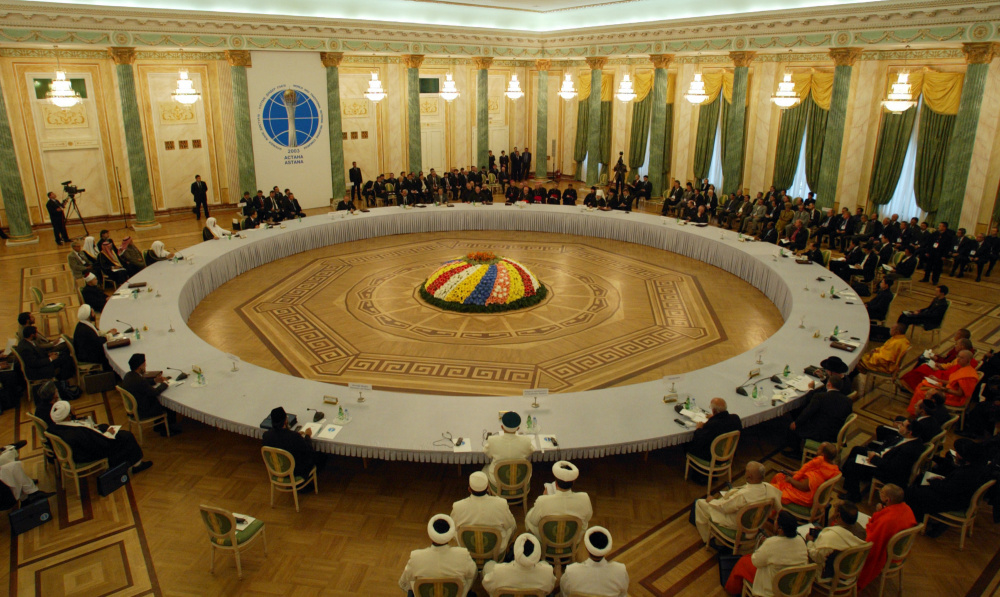 The idea to set up the congress also belongs to Nazarbayev with the common goal to boost cooperation and unification of representatives of various religions for the sake of peace and accord. The next congress is scheduled to take place in Nur-Sultan in September next year. 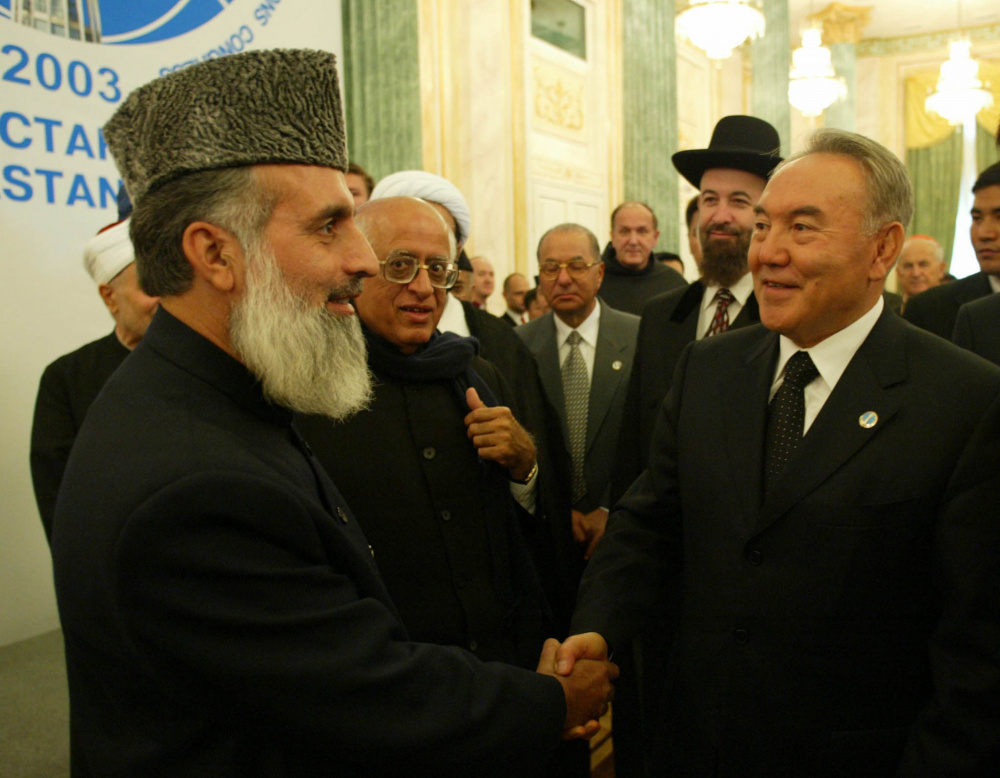 At the initiative of Nazarbayev, a new anthem of Kazakhstan was adopted in 2006. A popular song composed back in 1956 - "Menin Kazakhstanym" - became the anthem with amendments corresponding to the status of the national anthem. The music was composed by Shamshi Kaldayakov based on lyrics by Zhumeken Nazhimedenov. Amendments to the text were made by Nursultan Nazarbayev, considered to be a co-author of the text of the National Anthem of Kazakhstan.

One of the most significant political events for Kazakhstan achieved with the great support of Nazarbayev was the Organization for Security and Cooperation in Europe (OSCE) Summit held in Nur-Sultan in December 2010. It was the first time that the summit was held in the Central Asian region and on the territory of the former Soviet Union. This was also the year when Kazakhstan chaired the organization. 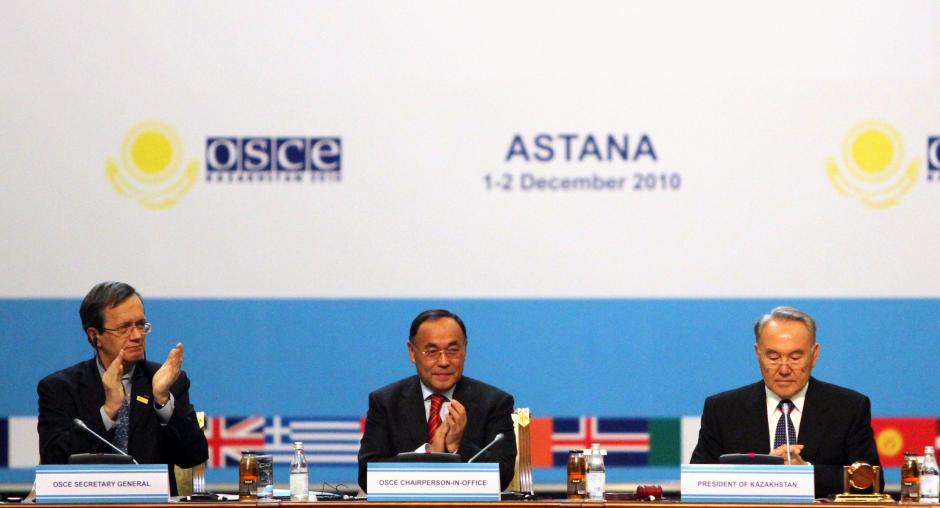 Twenty-eight heads of state attended the event, including the Vatican Secretary of State, the Federal Chancellor of Germany and the Minister of State of Monaco. The OSCE Summit in Astana ended with the adoption of a final declaration.

"We have reconfirmed our support to the comprehensive approach to security based on trust and transparency in the politico-military field, on rational economic and environmental policy and on the full-fledged observation of human rights, basic freedoms and the rule of law," he said. "We intend to raise the level and quality of security and understanding between our states and peoples."

In December 2012, Nursultan Nazarbayev presented the new Kazakhstan-2050 Development Strategy in the address to the nation that replaced the previous Kazakhstan - 2030 Strategy. Its main goal was to create a prosperous society based on a strong state, developed economy and universal labor opportunities and help Kazakhstan enter the list of the world’s thirty most developed countries.

At the initiative of Nazarbayev, Almaty hosted the first negotiations on the Iranian nuclear program on February 26-27, 2013, gathering the five permanent member states of the UN - Russia, China, the United States, France, and the United Kingdom - as well as representatives of Iran, Germany, and the European Union. Kazakhstan acted as a moderator.

On April 5-6, 2013, another round of talks on the Iranian nuclear program was held in Almaty between representatives of the E3+3 (Great Britain, Germany, China, Russia, USA, France) and Iran.

Submitting a bid to host EXPO-2017 has been among the major initiatives of Nursultan Nazarbayev. Surprising for many, Kazakhstan won the bid and hosted the specialized exhibition under the theme of future energy in the summer of 2017. 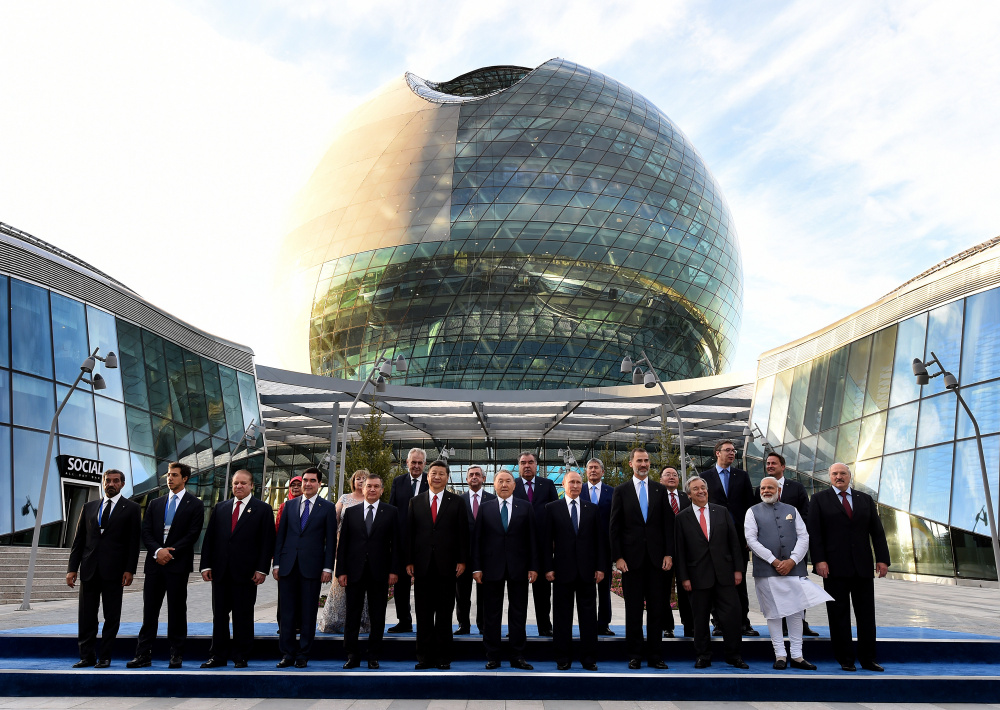 Kazakhstan became the first CIS country to hold the specialized exhibition that was attended by 115 states and 22 international organizations. The exhibition was visited by nearly four million people.

Kazakhstan as a non-permanent member of the UN Security Council

In 2017, Kazakhstan became a non-permanent member of the UN Security Council until 2019, much of that stemmed from the far-sighted and wise multivector policy laid down by Nursultan Nazarbayev. Kazakhstan’s election into the UNSC served as a strong impetus for the country’s peacekeeping and nuclear non-proliferation activities. 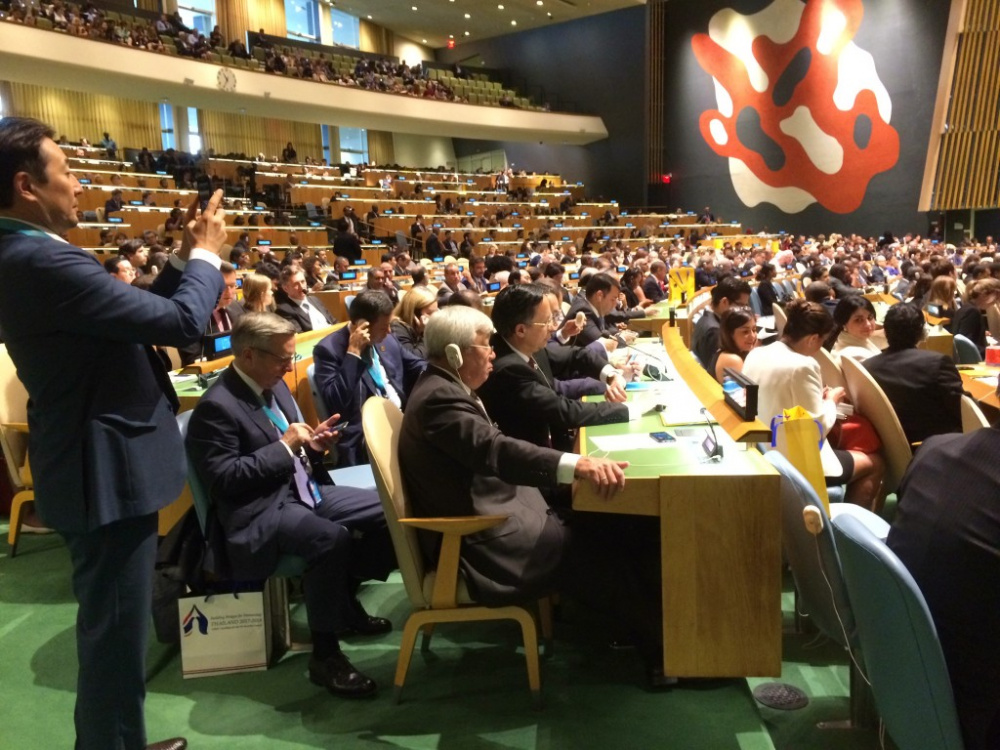 As the country’s president, Nursultan Nazarbayev has fast-forwarded Kazakhstan’s role as a mediator offering the international community a platform for open constructive dialogue across many issues.

Since January 2017, Kazakhstan has been a platform for the Syrian talks, known as the Astana Process, gathering on multiple times the representatives of the Syrian government, the UN, and the Syrian armed opposition. The guarantor countries of the Astana process are Russia, Turkey, and Iran. 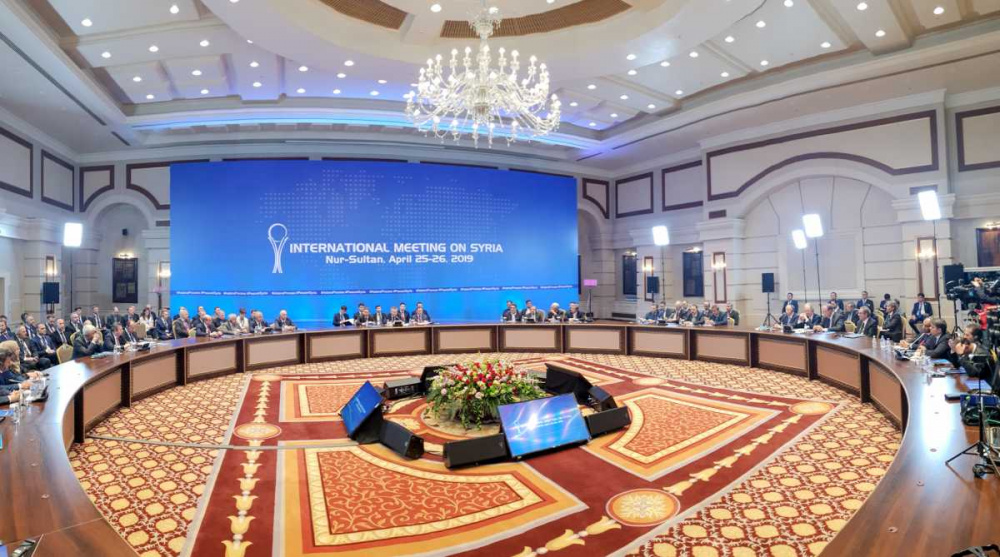 The next round of talks is scheduled to take place in Nur-Sultan in December.

The idea to establish the Astana International Financial Center belongs to Nazarbayev. The center was launched in July 2018. Three years later, the AIFC is a unique financial hub that brings together the best practices and opportunities offered by similar institutions around the globe – from New York City and London to Dubai, Hong Kong and Singapore and offers solutions and technologies used by international financial centers. 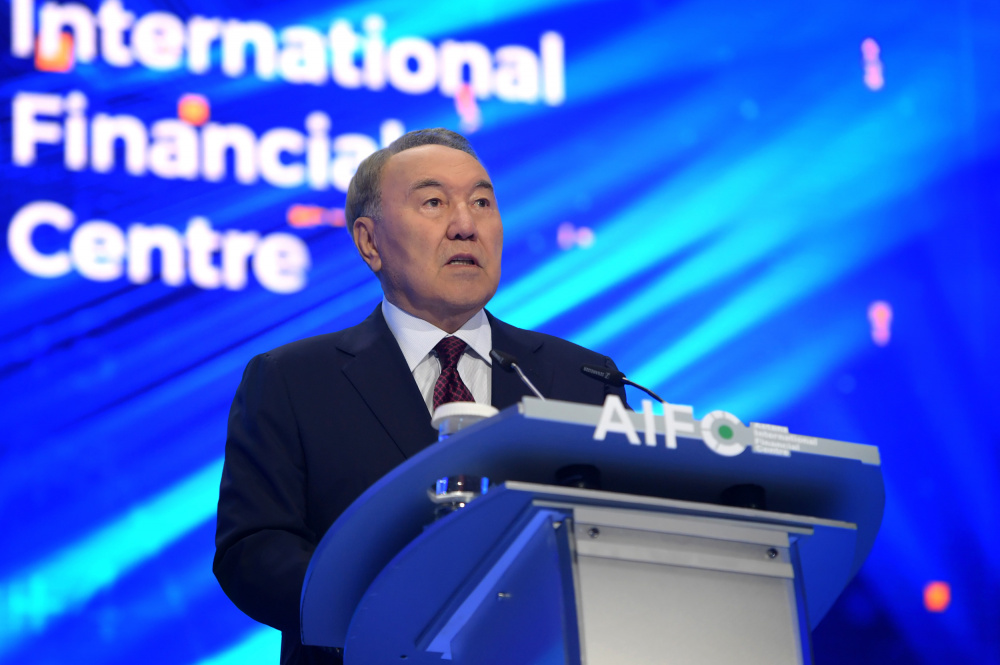 “The AIFC is a new chapter of independent Kazakhstan. Its launch is an important step in the steady and sustainable development of Kazakhstan,” Nazarbayev said at the opening ceremony on July 5, 2018. “We thoroughly studied the global experience in establishment, development, and work of financial centers across the world including in Singapore, Dubai, Hong Kong and other countries. The Kazakh model of the AIFC incorporated the best practices of these structures. Astana should become the main financial hub of the region and in the long-term perspective should be among leading Asian financial centers.”

On March 19, Kazakhstan's First President Nursultan Nazarbayev resigned leaving millions of citizens in awe of what stands next for the country’s future. Entire generations grew up in Kazakhstan knowing Nazarbayev as their only president. 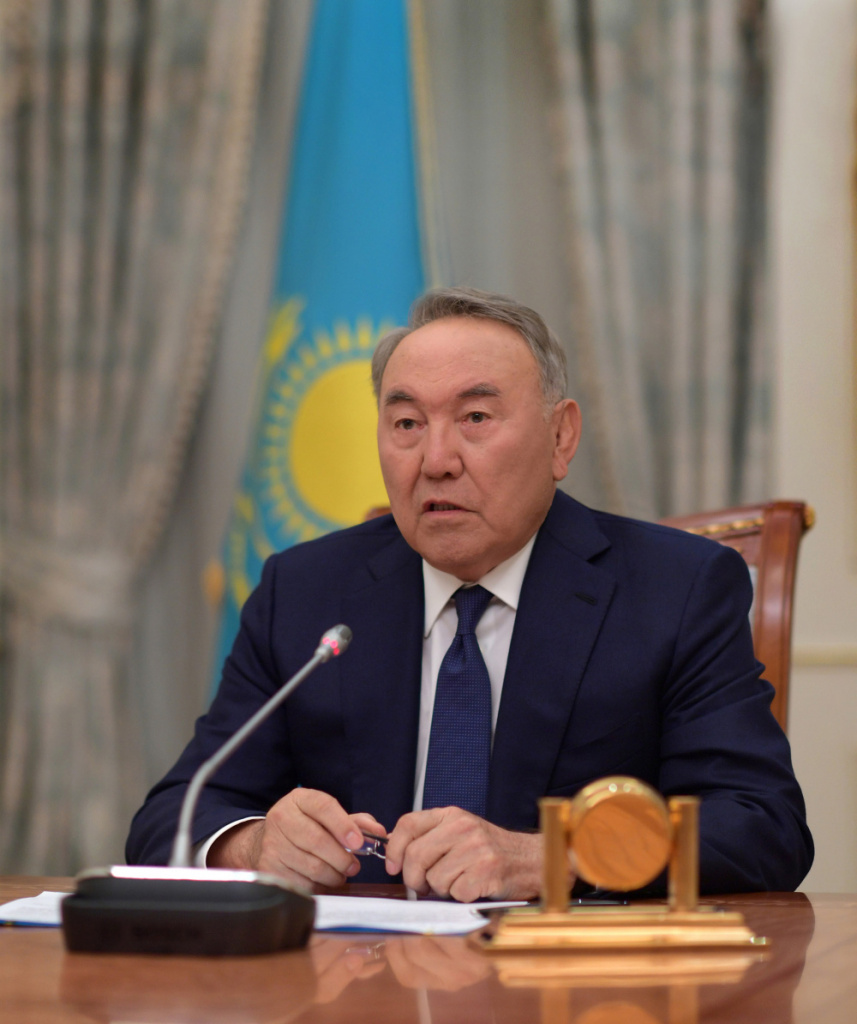 Despite the resignation, Nazarbayev continues to play an important role in the country. At the latest meeting of the Nur Otan political council, Nazarbayev also haded over the chairpersonship of the Nur Otan party to current President Kassym-Jomart Tokayev, what he described as a “continuation of the transition of power.”

“Kazakhstan is stepping into the fourth decade of its independence, which represents an epoch of big changes, demanding and eventful determinations,” said Nazarbayev.

Analyzing the achievements of Kazakhstan, one can be sure that the country has chosen the right path for its strategic development. Though a lot is still ahead, what the country has achieved up to this day is something that needs to be valued and cherished.