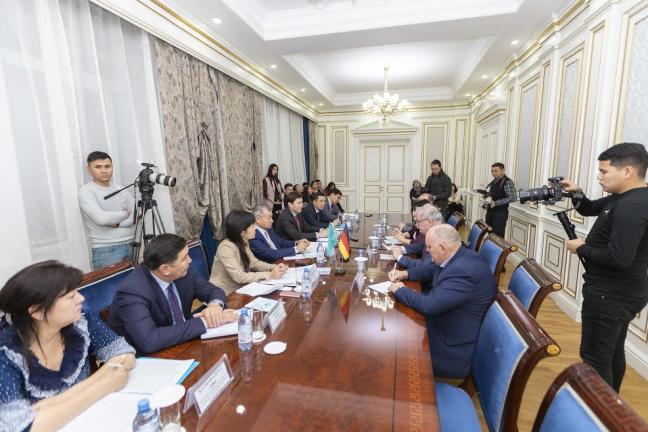 Tilo Klinner with his team took a tour of the Eastern Kazakhstan Investment Centre, where he was presented with the region’s investment potential. The delegation visited Kazzinc and Ulba Metallurgical Plant, following which a meeting with Governor Danial Akhmetov took place.

“I hope you have had full information about possible areas of cooperation. During your last visit, Mr. Ambassador, we have already discussed joint work and the creation of a working group. Therefore, we sent a letter with a proposal on cooperation in the areas of agriculture, education, health and tourism,” the Governor of Eastern Kazakhstan said.

On his part, Tilo Klinner noted that the company SAP Kazakhstan, which is a branch of the German company and works in the field of IT, has concluded two memorandums of understanding with Kazzinc and Asia Avto. The agreement signed with the latter provides for the opening of a Competence Centre at D. Serikbayev East Kazakhstan State Technical University.

The meeting touched upon the cooperation in the field of processing waste from enrichment plants.

“In my last letter I mentioned the opportunity to attract expert knowledge in this area. The university in the city of Friedberg deals with that. In the future, we will discuss joint work with D. Serikbayev East Kazakhstan State Technical University. In this regard, we have great potential. During the visit of President Kassym-Jomart Tokayev to Berlin, we will talk more intensively about the processing of waste from enrichment plants, and we will develop an operational concept,” Tilo Klinner said.