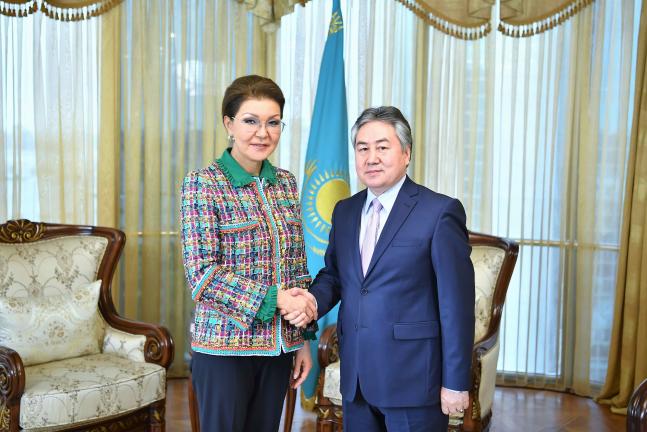 The diplomat conveyed the invitation from Chairman of the Jogorku Kenesh Dastanbek Dzhumabekov to pay an official visit to Kyrgyzstan.

“Today, Kyrgyzstan and Kazakhstan have an active political and economic dialogue. Last year, the President of Kazakhstan paid a state visit to Kyrgyzstan, during which he held talks with President of the Kyrgyz Republic Sooranbay Jeenbekov. The agreements reached gave a new significant impetus to the development of bilateral relations and identified promising areas of partnership”, Kulubaev said.

Jeenbek Kulubaev noted the high contribution of Elbasy Nursultan Nazarbayev to the stabilization and settlement of the political situation in Kyrgyzstan.

“We have no contradictions, we try to speak in international dialogues”, he said.

Speaking about economic interaction, the Ambassador of the Kyrgyz Republic said that within the framework of negotiations between the heads of the two countries, an agreement was reached to bring trade to $ 1 billion.

“In order to stimulate export-import operations, it was proposed to create a logistics center for the design and processing of goods. To date, this topic is being finalized with relevant ministries. This will be beneficial cooperation in the export of agricultural products”, the diplomat said.

Dariga Nazarbayeva supported this initiative and noted that a logistics center at the border is needed, as it will help expand trade and economic cooperation.

In addition, Jeenbek Kulubaev touched on the topic of resuming flights between the cities of Nur-Sultan and Bishkek, and also stressed the need to establish customs interaction between the two countries.

The head of the Senate noted that there is a need to review the customs legislation of the two countries.

In addition, the Chairperson of the Senate raised the topic of rational use of water resources in the region.

“We have a common problem - water. As the sowing season comes, our farmers begin to suffer from a shortage of irrigation water. This reduces the yield of our farmers. This is a very sensitive topic. It is important that the two sides come to a common solution. We are concerned that a whole area is suffering due to water problems. It is unfortunate that such barriers exist and the problems are not solved for years”, she said.

Following the meeting, the Senate Speaker proposed to intensify the work of the inter-parliamentary working group to develop common approaches to solving the water balance problem.