In preparation for the parliamentary hearings in the Senate, a series of meetings with representatives of the agricultural industry is taking place, the Senate press service reports. 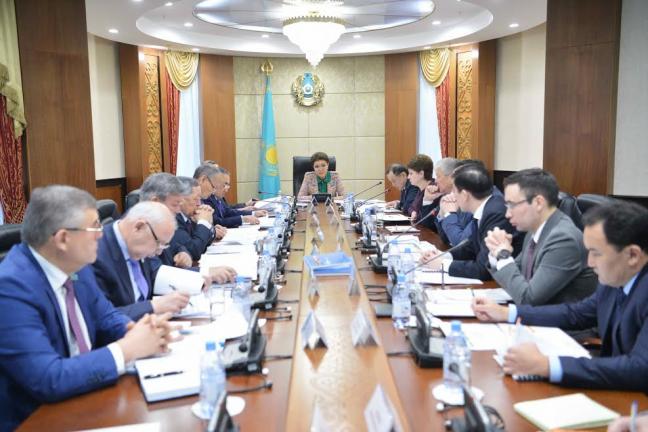 The decline in exports is explained by the fall in world export prices for food products, he added.

In turn, the speaker of the Senate emphasized that farmers' unions do not agree with such statistics.

“It is very difficult for our products to get to our own shelves. Large shopping centers put manufacturers in enslaving conditions. Intermediaries make 200-300% extra charge. It turns out that it is unprofitable to display products on the domestic market. There should be a policy for regulating trade margins, especially retail. At least for essential goods, on the basis of which we consider the cost of living, must be regulated,” Dariga Nazarbayeva said.

“The population is worried that prices are rising for basic necessities, for potatoes, for buckwheat. What is the use of subsidizing, investing, different programs, roadmaps if the situation is not improving? It turns out that the increase in prices eats up all the measures of state support that are rendered to socially vulnerable segments of the population,” the Senate Speaker said.

According to her, there are a number of proven mechanisms for regulating export policies. For example, apply mirror measures in relation to importing countries, tighten quality control measures for imported products. At the same time, on the other hand, to develop and reduce the cost of exports, develop a program to optimize the logistics of agricultural products, with the possibility of active involvement of private companies.

The question of different product names in statistics and different understandings of individual points in various government agencies was raised by Senator Ali Bektayev.

“Such data mislead state authorities,” the Senator noted and called for putting this system in order.

A report was made by the Chairman of the Board of National Company Food Contract Corporation Kanat Karaulov. He called the problem of quantitative and qualitative preservation of grain at grain receiving enterprises, associated with dishonesty of owners, theft, as well as the lack of state control. As a solution to the problems, he proposed develop electronic grain receipts when it comes to automation of accounting for acceptance and shipment of grain at reception points; to transfer to the Food Corporation grain receivers that are in bonded the Fund of problematic loans; to periodically check the actual availability and quality of grain from market participants and their compliance with reporting data.

Continuing the topic of agricultural production, the participants spoke of the inaccessibility of credit resources for business entities. According to industry representatives, second-tier banks classify the agricultural sector as a high-risk category, characterized by low liquidity and the absence of a collateral base, which reduces the amount of guarantees issued.

One of the most pressing issues for entrepreneurs, according to First Deputy Chairman of the Board of Atameken Eldar Zhumagaziyev, is the VAT refund for exporting products, which has not been resolved for many years.

“Kazakh millers constantly face the problem of VAT refunds by tax authorities. In this connection, there is a need to revise the procedure for VAT refunds for exports through a simplified mechanism for exporters,” he added.

He pointed out the high tariffs for the transit of grain and flour through other countries. To deal with it, according to him, favorable tariff conditions in transit countries for Kazakhstani exporters of grain and flour when transported by rail can come handy.

Concluding the meeting, Dariga Nazarbayeva separately dwelled on the problem of overlapping functions of key institutions responsible for the development of non-resource exports.

“Who is involved in the analysis of performance evaluation of these organizations? And why not create a single window for those who are interested in exporting today?” she asked.

The Senate Speaker instructed the Committee on Agrarian Issues, Nature Management and Rural Development to study the problematic topics raised by the meeting participants and prepare them for discussion at the parliamentary hearings.