For one moment, it seemed the situation with COVID-19 flattened, but it is not the case as new variants cause another spike in coronavirus cases globally, reports a Strategy2050.kz correspondent.

The rising cases may be a sign of a third wave, said WHO Director-General Tedros Adhanom Ghebreyesus on Wednesday.

The virus is evolving with new variants making it more transmissible. The Delta variant continues to dominate worldwide, reported in more than 111 countries at the moment.

“As increasing vaccination rates in Europe and North America started to take effect, we saw sustained declines in cases and deaths. Unfortunately, those trends have now reversed, and we are now in the early stages of a third wave. Last week marked the fourth consecutive week of increasing cases of COVID-19 globally, with increases recorded in all but one of WHO’s six regions. And after 10 weeks of declines, deaths are increasing again,” he said at the Emergency Committee meeting on COVID-19.

The number of cases now exceeds 187 million and deaths surpass 4 million. The United States has the highest number of confirmed cases since the pandemic began - more than 33 million, followed by India and Brazil with 30.9 million and 19.1 million, respectively.

In the United States, the cases are surging in more than half of the U.S. states, with a seven-day average of daily new cases reaching 24,141, which is 65.9 percent higher than the previous week.

Nearly 56.7 percent of the country’s population received at least one dose of vaccine, and 48.2 percent were fully vaccinated.

Some European countries reimpose new restrictions, as the Delta variant continues to spread. French President Emmanuel Macron announced on Monday that from August onwards, people will be required to show proof of vaccination or a negative test to visit dining venues, trade malls, planes, and trains, reports France24 agency.

The use of health passes will be extended to a greater number of venues moving forward, said Macron. Vaccination will also be mandatory for healthcare workers in France.

Similar to France, in Greece, vaccination will be necessary to access public places. On Monday, Greece Prime Minister Kyriakos Mitsotakis said only those, who have been vaccinated, will be allowed to visit indoor venues.

In Kazakhstan, which has seen its record high daily cases exceeding 5,000, the government also tightened restrictions in the regions that continue to remain in the high-risk red zone. On Wednesday, Kazakh Prime Minister Askar Mamin held a meeting of the interdepartmental commission working to prevent the spread of coronavirus infection in Kazakhstan. 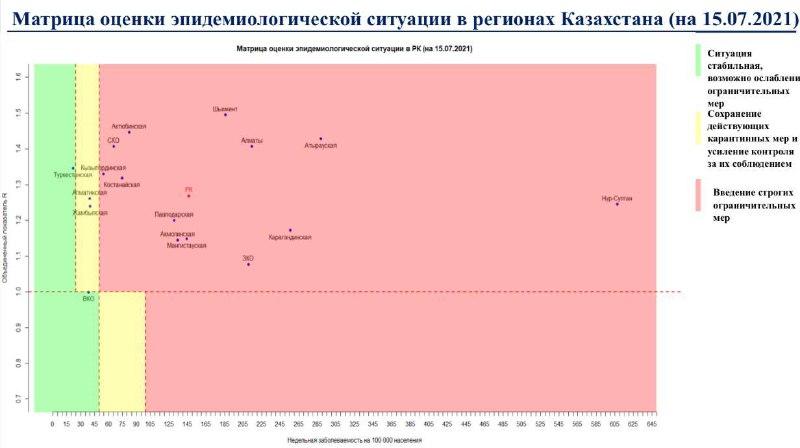 The four regions include Nur-Sultan and Shymkent, and Karaganda and Atyrau regions that report the highest numbers.

On weekends, regardless of participation in the Ashyq project that displays people’s COVID-19 status when they enter a facility, the work of public transport, shopping malls, retail chains, sports facilities, and dining areas are prohibited.

On weekdays, the operating hours of children's entertainment centers, shopping malls, as well as outdoor and indoor markets will be restricted until 17.00.

On weekdays, fitness centers, yoga centers, sports and recreation facilities, spas, swimming pools and cinemas participating in the Ashyq system will be allowed to operate until 20.00, and those, who are not part of the system, will have to close by 17.00.

Eighty percent of employees of all organizations, except for those who have been vaccinated and who have been sick in the last three months, will have to work from home.

The country’s epidemiological situation has been worsening. The reproductive value, which refers to the average number of people that an infected person can infect, is 1.2, while occupancy of infectious beds is 43 percent and intensive care - 35 percent.

Over 4.6 million people or 46.5 percent of the eligible population have been vaccinated with the first component, and over 2.5 million people got the second one.

The latest decree of the country’s chief sanitary authorities makes vaccination mandatory for employees of organizations in the service sector, trade, education, catering, healthcare, and leisure. The decree says the first component should be received by August 15 and the second component by September 1.