As New York hosts the 76th session of the United Nations General Assembly from September 21 until September 27, President Kassym-Jomart Tokayev addressed several high-level events over this week, including the General Debates, reports Strategy2050.kz. 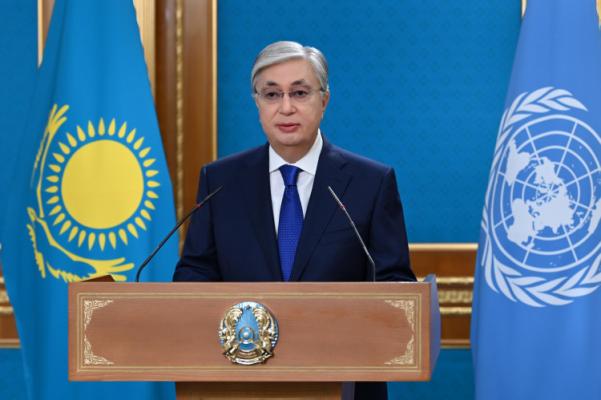 At the General Debates, world leaders focused the discussion on the ongoing pandemic and security issues. Tokayev centered his video address on climate change, the humanitarian situation in Afghanistan, and post-pandemic recovery.

“The economic and social consequences continue to be very severe. Unemployment has skyrocketed, and hundreds of millions of people have been left without a livelihood. Today, more than 130 million people live in extreme poverty. Decades of development progress could be undone. In many ways, the pandemic has exposed our vulnerability and underscored the critical importance of multilateralism and international solidarity," said Kassym-Jomart Tokayev.

Tokayev called for the need to decrease the vaccine gap reflecting the staggering inequality between rich and poor countries.

On his country’s part, he confirmed the readiness of Kazakhstan to share its own QazVac vaccine as part of global COVAX initiative or through bilateral agreements.

QazVac vaccine is produced by the Kazakh Research Institute for Biosafety Problems. It has completed the phase III trials and the results are scheduled to be published in a peer-review medical journal by the end of 2021 or the beginning of 2022.

“We must rebuild a more just, sustainable and humane world. We must begin by ensuring universal and equitable access to vaccines. This issue must be addressed in terms of global ethics and solidarity,” he added.

Climate change poses risks for all countries. According to the World Bank, climate change can push at leats 132 million people into poverty in the next ten years.

Climate change forces the world to face biodiversity loss, deforestation, and food insecurity, among other problems.

It is an equally important issue that Kazakhstan seeks to address.

“As the largest landlocked country, Kazakhstan's climate is changing faster than the world average, threatening our population and economy. Over the past 75 years, the average annual temperature has risen by 2°C, with serious droughts now occurring twice every five years. Because of this, Kazakhstan is committed to achieving carbon neutrality by 2060. Next month, we are launching a national strategy for low-carbon development until 2050, aimed at reducing the energy intensity of GDP by 50 percent compared to 2008 levels," said the President of Kazakhstan.

The ambitious goal of achieving carbon neutrality by 2060 was announced by Tokayev during the Climate Ambition Summit in December 2020. While the country still relies heavily on fossil fuels, the commitment is there.

The humanitarian situation in Afghanistan

After Afghanistan was taken over by the Taliban group, the humanitarian situation has been devastating. The United Nations estimates at least 18 million people – half of the country’s population – could be at risk of a looming humanitarian crisis.

Tokayev supported the UN Security Council's call for a new negotiated government that would be inclusive and representative.

“Kazakhstan sees a future Afghanistan as a truly independent and sovereign state at peace with itself and its neighbors. Afghanistan must continue to fulfill its international obligations and ensure that its territory does not become a staging ground for terrorists, drug trafficking and human traffickers. Regardless of our political or personal beliefs, we must not abandon the people of Afghanistan to their fate now. The urgent humanitarian situation must be our top priority. UN agencies and other humanitarian organizations must have immediate, safe and unimpeded humanitarian access," said Tokayev.

In August, Kazakhstan has provided temporary relocation of UNAMA and other UN offices in Afghanistan. Tokayev said Kazakhstan is ready to provide a logistical platform for the delivery of humanitarian aid to the country.

In August, Kazakhstan evacuated its citizens from Afghanistan, and in September, evacuated a group of ethnic Kazakhs, who lived in Afghanistan.

The Kazakh embassy, however, continues working in Kabul at a limited capacity.

Food security is another important topic that Tokayev raised in his address. He brought up the World Food Program’s forecast that nearly 270 million people could face hunger.

“Kazakhstan is a major grain producer and exporter and one of the founders of the Islamic Organization for Food Security. Its fourth General Assembly was held last month in our capital. We invite foreign investors to join us in creating a better future for sustainable agriculture," said Tokayev.

Kazakhstan, however, faces its own risks. The country is located in the zone of risky farming and is affected by an arid climate. The country's water potential is 40 percent dependent on water inflow from neighboring countries.

“To achieve more efficient use of land and water resources, we are taking measures to improve land fertility, introduce water-saving technologies and digitalize water supply systems. It has become very clear that when it comes to sustainable food systems, water diplomacy issues become relevant and even critical for many countries. Issues related to food systems and water management, including the use of trans-border rivers, are inextricably linked. This should be reflected in agreements on food systems," said Tokayev.

He called on the UN member states and other partners to strengthen agro-technological, scientific and innovative interaction between all countries, as well as to move forward on issues of finance, investment, transport, and logistics. In doing this, the role of the UN Food and Agriculture Organization be important.

Tokayev said that sustainable development depends not only on economic growth but also on social and political development.

He reaffirmed Kazakhstan’s commitment to this goal.

“This January, Kazakhstan ratified the Second Optional Protocol to the International Covenant on Civil and Political Rights, abolishing the death penalty. In June, the Government adopted the Human Rights Priority Plan, which provides a long-term institutional framework. In close cooperation with our international partners, we are working hard to eradicate human trafficking, which requires exceptional global cooperation,” said Tokayev.

Kazakhstan put forward its candidacy for the UN Human Rights Council for 2022-2024, and if elected, Kazakhstan will “strive to make a real contribution to the work of the Council,” he added.