As part of the Prime Minister Askar Mamin’s working trip to the United States, agreements with leaders of American agribusiness on investing in opening meat processing and irrigation systems in Kazakhstan were reached, primeminister.kz informs. 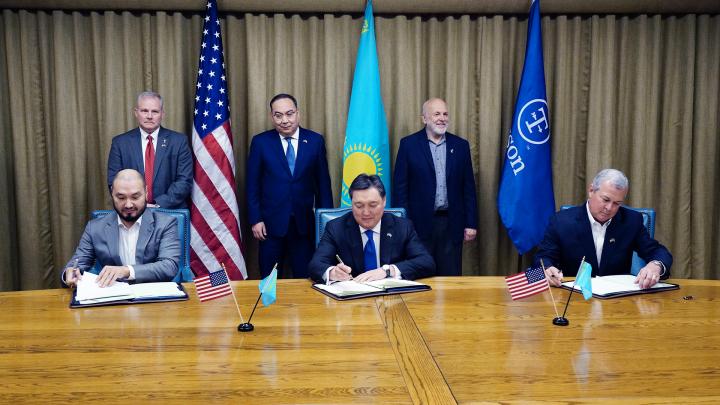 Following Mamin’s negotiations with the leadership of Tyson Foods, the largest meat producer in the USA, represented by the President Noel White and Chairman John Tyson, an agreement on the implementation of the modern agro-multiprotein industry program in Kazakhstan was signed.

The document at the first stage provides for the construction of a modern meat processing complex with a capacity of about 2 thousand heads per day in Kazakhstan. The enterprise will not only meet the needs of the Kazakhstani market, but also export products to foreign markets, helping to ensure the country's annual agricultural profit of more than $1 billion.

"Tyson Foods is a world-class company with the experience Kazakhstan needs to make a breakthrough in the development of meat processing and increase the number of livestock on farms. The opening of the enterprise will stimulate not only the development of the meat industry, but also other related sectors of the agro-industrial complex – veterinary medicine, agricultural machinery, fodder crops, the creation of feedlots, etc. The project will create tens of thousands of new jobs in Kazakhstan’s agriculture,” said Mamin.

For reference: Tyson Foods was founded in 1935, the company's trade turnover is $42.4 billion, the number of employees is 141 thousand people.

Tyson Foods is implementing a project in conjunction with the Kazakh company Kusto Group. The production cycle will be accompanied by information and consulting services for Kazakh farmers according to the model of the American service “Extension,” which includes consultations, on-the-job training of local personnel and vocational training.

The prime minister visited the cities of Springdale, Arkansas and Dakota City, Nebraska, where he got acquainted with the production facilities, technological process and research and development of Tyson Foods.

In Omaha, Mamin met with the Governor of Nebraska Pete Ricketts and the President of Valmont Industries, the market leader in irrigation systems, Stephen Kaniewski.

The parties discussed the prospects for cooperation and exchange of experience in the application of high technologies for machine irrigation, telecommunications, renewable energy, infrastructure construction, as well as agricultural science and education.

Following the results of negotiations, in the presence of Mamin and Ricketts, an Agreement was signed between the Ministry of Agriculture of Kazakhstan, Kusto Group and Valmont Industries on the principles of effective irrigation and improving agricultural productivity in the Republic of Kazakhstan.

The document provides for the construction in Kazakhstan in 2022 of the plant for production of Valley Pivot Irrigation Machines with a capacity of 1 thousand frontal and circular irrigation machines per year. The US irrigation technologies will increase crop productivity and reduce agricultural costs by 50%.

In the future, it is planned to expand the production of the enterprise in Kazakhstan to the release of equipment for telecommunications, renewable energy and infrastructure construction. Products manufactured in the Republic of Kazakhstan will not only meet the needs of the domestic market, but also develop export potential to foreign markets.

“The use of advanced technologies by Valmont Industries will have a multiplier effect on crop production and the creation of a forage base for livestock production,” said Mamin.

The prime minister visited to the headquarters of Valmont Industries and got acquainted with the production capacities and technological process of the enterprise.