Senate Speaker, Head of the Secretariat of the Congress of the Leaders of World and Traditional Religions Dariga Nazarbayeva has met with Francis Assisi Chullikatt, the Apostolic Nuncio in Kazakhstan, with the representative of the Vatican praising Kazakhstan’s activity to enhance global security by bridging the differences between religions and cultures through a peaceful dialogue, Strategy2050.kz informs with reference to the Senate of the Kazakh Parliament. 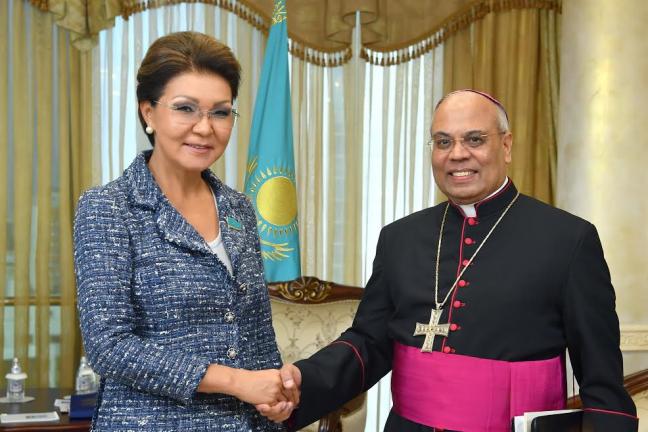 “The Congress of the World and Traditional Religions is a one-of-a-kind platform for addressing problems and challenges,” Francis Chullikatt said.

Speaking of the fruitful cooperation between Kazakhstan and Vatican, the Senate Speaker has noted that Kazakhstan has become the first and only Central Asian country visited by the supreme pontiff.

Pope John Paul II’s visit in Astana in 2001 is one of the momentous events in our country’s history.

Nazarbayeva has informed that she plans to pay a visit to Vatican in the run-up to the 7th Congress of the Leaders of World and Traditional Religions.

Noting the successful performance of the paediatric hospital in Vatican, the Senate Speaker has proposed collaborating between Vatican and the Kazakh Health Ministry to provide medical assistance to Kazakh children and teaching Kazakh doctors better technologies.

The Apostolic Nuncio in Kazakhstan has spoken about visas for Vatican priests. They have to renew visas each year, which is problematic.

The Senate Speaker has taken this issue under her control as the first steps to that end are already taken by the Foreign Ministr, so it is just a matter of resolving inter departmental procedures.

While the meeting the prospects for cooperation of Nazarbayev’s Centre for Interfaith and Intercivilizational Development with UN Organizations came under discussion.