Kassym-Jomart Tokayev has outlined that the full realization of the Leader of the Nation’s (Elbasy) Five Institutional Reforms and National Plan is at the core of his efforts during a joint meeting of the Chambers of the Kazakh Parliament under the chairmanship of the President. 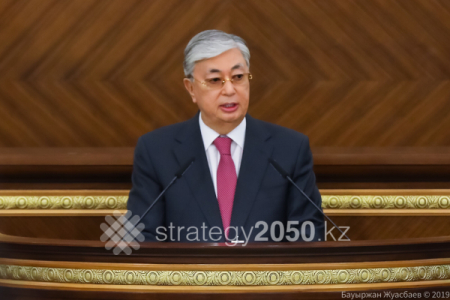 The opening of the 5th meeting of the 6th convocation of the Parliament has seen the Kazakh Head of State deliver his first address as President to Kazakh people. The address has centered on tightening criminal punishment for drug trafficking, violence and other serious crimes against the person.

“An important landmark is approaching in the history of our country as 30 years since the Kazakh people announced independence will be marked,” the Kazakh President outlines in his address.

The Head of State has said that Nazarbayev’s model is our country’s development path, adding that the political continuity is key to a stable State.

The President has underlined that it is necessary to strengthen the role of civil society.

“Our common task is to set up the hearing State (State-listener) concept responding to the public requests. We should uphold the civil society; engage it in discussing the most current statewide problems. That is what is behind the National Public Trust Board based on a rotational basis,” Tokayev has said.

The judicial reforms have been outlined by Kassym-Jomart Tokayev.

“Henceforth and for the first time ever, the court will have the discretion to initiate the collection of additional evidence,” the Head of State has said.

Tokayev has said we moved away from harsh punitive measures and got carried away by humanization in spite the fact that serious crimes do not go away.

While addressing to the Government, he has spoken of more harsh punishment against drug trafficking, pedophilia, violence against women, domestic violence as well as other offences against the person, especially against children.

The Kazakh Head of State has also outlined that 100 billion tenge has been provided to support small and medium businesses and develop the economics of simple things.

There will be a tax exemption in place on income earned by micro and small businesses for a period of 3 years by January 2020.

Kassym-Jomart Tokayev has also dwelled on the land issue.

“There must be no speculations about the transfer of Kazakh land to foreigners,” Tokayev has said.

He has called for the rational and intended use of agrarian land, outlining additional funds will be provided for Auyl-el besigi programme.

The funds will be channeled to transport, water supply and gasification.

Tokayev believes that the Kazakhstan’s budget lines need to be considered.

“Kazakhstan’s budget needs to address the two objectives – financing the country’s economic performance and addressing the social issues,” the President has said.

According to the Kazakh President, the education system is a major social issue amidst the deficit of technology talent.

In that context, the President has given a task to develop talented children.

He has also outlined that teachers’ salary will increase two-fold by 25 per cent. Salary-raising will start in 2020, the President has said.

Tokayev has also emphasized that people should have ready access to local authorities.

Tokayev has also instructed to merge all the existing housing programmes into one to avoid fragmentation, calling to tightly administer it so as to give housing to those in most need.

Concluding his address, the Kazakh President has said that the future changes should be experienced by each citizen.