The reporting and statistical GDP figures for 2018 and the economic development for the 7 months of the present year, the renewed forecasts of world economic growth and tendencies on the global commodity markets have served as the underlying factors in determining a forecast of social and economic development of the country for 2020-24, Kazakh National Economy Minister Ruslan Dalenov reported this information at the Government meeting. 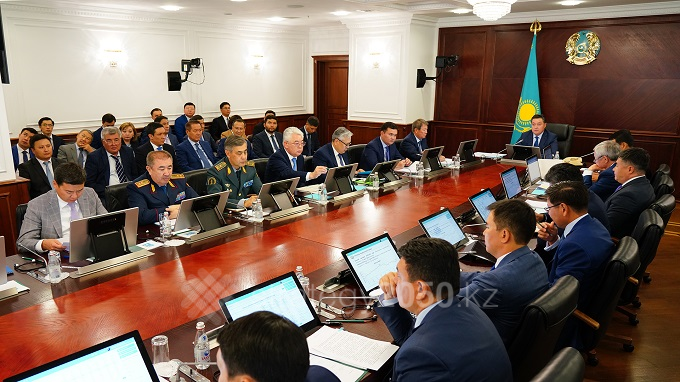 According to the Minister, Kazakhstan’s GDP maintains a stable growth of 4.2 per cent, inflation is within the target corridor of 5.4 per cent, and investments grow at a rate of 11.3 per cent.

A forecast of socio-economic development of Kazakhstan for 2020-24 is built upon the best case.

“GDP growth will take place due to an increase in gross accumulation, domestic consumption and exports. Investments will be a considerable factor for maintaining the economic growth rate”, Dalenov said.

As for sectors, most of the growth is expected in the non-primary sector - manufacturing, services and construction, with the given sectors’ average growth rate of 4.7 per cent, contributing to GDP growth at 3.5 per cent.

Oil production will raise from 90 million tonnes in 2020 to 100 million tonnes by 2024, which will be possible through expanding Tengiz, Karachaganak and Kashagan fields.

Yerbolat Dossyaev, the National Bank Chairman, reiterated that the Bank’s main target is to maintain the inflation within 4-6 per cent in 2019-21, reducing it to 3-5 per cent.

“Reaching the inflation targets will depend on the following factors: first, external monetary conditions. Week global demand and uncertainty surrounding the trade policy have eased the external monetary conditions. In particular, the rate of the United States Federal Reserve System has been reduced for the first time in 10 years. Other leading countries’ central banks are concentrated on low-interest-rate policies. The U.S. economy slowdown helps to reduce the risks of capital outflows from the developing countries and lessening the pressure on their currencies. Second, the external inflationary pressure remains at a low level at the background of the inflation stabilization in Russia within its target as well as low price growth rates in the EU and China. The third factor for maintaining the inflationary pressure is rise in food prices on the global markets”, the National Bank Chairman stated.

The National Bank has forecasted a decline in Kazakhstan’s exporting products, decreasing by 12 per cent in 2019 compared with 2018 taking into account lower oil prices from 71.6 US dollars in 2018 to 61.3 US dollars in 2019.

The National Bank Chairman pledged that the Bank’s policy will focus on levelling the influence of negative external factors.

At the end all the participants of the Government session have approved the forecast of socio-economic development of Kazakhstan for 2020-24.