Based on the five months of this year, a positive trend in GDP retains, with GDP up by 4% and annual inflation of 5.3%, which is within the inflation corridor of 4.6%. The investment level outpaced the GDP growth, with the growth accelerated to 7.8%, up from 6.7% in the four months of this year. 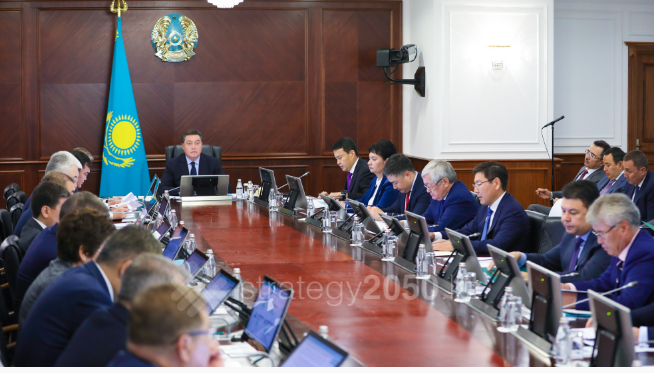 “Investments in agriculture and construction have increased by a factor of 1.5, while in industries a 17.5% rise was observed in investments. International reserves have grown by 0.4% since last month, totaling at 86.7 billion dollars”, Ruslan Dalenov, Minister of National Economy of Kazakhstan, said at the Government sitting devoted to the socio-economic development of Kazakhstan following the results of 5 months of 2019.

“Construction shows the acceleration, growing by 5.5% during the five months. Work to construct industrial facilities, roads, gas pipelines has scaled up construction and engineering work in large plants as well”, he said.

Having reported on the service sphere, the Minister outlined the acceleration was observed. During the reporting period, the sphere has gone up by 4.7% compared with 4.2% in January-April, with commerce representing the largest increase.

According to the Minister, certain regions have the positive dynamic in a series of indicators, including manufacturing, processing, agriculture, construction, housing and investments.

The Minister announced the steps to sustain the positive dynamics, they include, first, to increase control over the lagging indicators. Second, to intensify work to attract investments through investment projects. Third, to adopt the new Export Promotion Roadmap and upgrade its measures’ implementation. Fourth, to provide control in order to prevent unjustified increases in food prices, including socially significant foods during seasonal lowering of prices. Fifth, to ensure the effective utilization of budgetary funds.

In May this year the monthly inflation was 0.6%, and the annual inflation has risen to 5.3%.

“In May 2019 the sharp price growth of 7.9% in food markets was the main contribution made to the inflation against a background of the rapid rise in peoples’ real income. A 6.1% growth in non-food prices was observed. The input of tariffs for remunerated services to the inflation remained low”, Yerbolat Dossayev, Chairman of the National Bank, said.

Based on the forward-looking round, the National Bank took a decision on 3 June to maintain the base rate at 9%. The refined assessments on external conditions and internal factors allow for reaching the target corridor of 4-6% by the year 2020.

“The situation in the domestic currency market is influenced by the global oil market. Between 27 May and 5 June oil prices decreased by 13% to 60.6 US dollars due to tougher trade circumstances in the global economy. However, in the last two days there was a correction in oil prices, and the current price is 62.3 US dollars thanks to the U.S.-Mexican agreements on tougher illegal migration control”, he said.

In the period between 27 May and 5 June the tenge weakened by 1.3%. But in the last few days the situation has levelled off, and the rate of the tenge has strengthened by 0.3% in 5-10 June.

As of 10 June, the exchange rate is 383.40 tenge to 1 US dollar. The improvements in the country’s balance of payments enables to support the tenge. The current account has been showing a surplus during the subsequent two quarters, according to preliminary estimates, in the first quarter of 2019 the surplus amounted to 8 billion US dollars, with exports rising by 9.9%, and imports – by 6.1% or 7.8 billion US dollars.

“As at 1 June 2019, according to preliminary information, the National Bank’s gross gold and currency reserves once increased by 3.5% or 948 million US dollars in May were 28 billion US dollars. The Bank’s net international reserves amount to seven months of imports of goods and services, while the minimum three months required. The National Fund’s assets in foreign currency, according to preliminary data, as at the end of May this year were 58.6 billion US dollars, 1.1% down than a month ago due to the guaranteed and target transfers allocated to the budget”, the National Bank Chairman concluded.

Having underlined the main economic drivers such as construction, commerce (by 7.5%), transport (by 5.3%), manufacturing sector, including machine building (by 16%), particularly auto industry (by 46.4%), light industry (by 23%), non-ferrous metal mining (by 15.7%) and oil refining (by 9.4%), which contributed to the GDP growth of 4% to the given period of last year in May-June this year, Kazakh Prime Minister Askar Mamin pointed to the sectors with low figures, among them production of coal, iron ore, ferrous metallurgy, crude oil and natural gas.

The PM tasked the sectoral Ministries to take the relevant steps to reach the planned target figures.

“As for the inflation in the regions, even if the situation is not outside of the corridor set, a slight increase is observed in Atyrau, Mangystau regions and cities Nur-Sultan and Shymkent largely due to increased prices for agricultural products. As the market is saturated with fresh vegetables the prices have to fall. The Governor’s Offices should take steps to stabilize prices, especially these for socially significant products”, the Kazakh PM stated.