Domestic tourism. How it is developed in Kazakhstan

As the ninth largest country in the world, Kazakhstan is full of plenty to explore both for domestic citizens and foreigners. For this purpose, the Government of Kazakhstan has developed a concept to develop tourism in Kazakhstan until 2023 and the state program on tourism development until 2025. During the exclusive interview with Kazakh Tourism Chairman Urken Bisakayev, the Strategy2050.kz Information Agency has learned how these documents are implemented and ways the domestic tourism is developed. 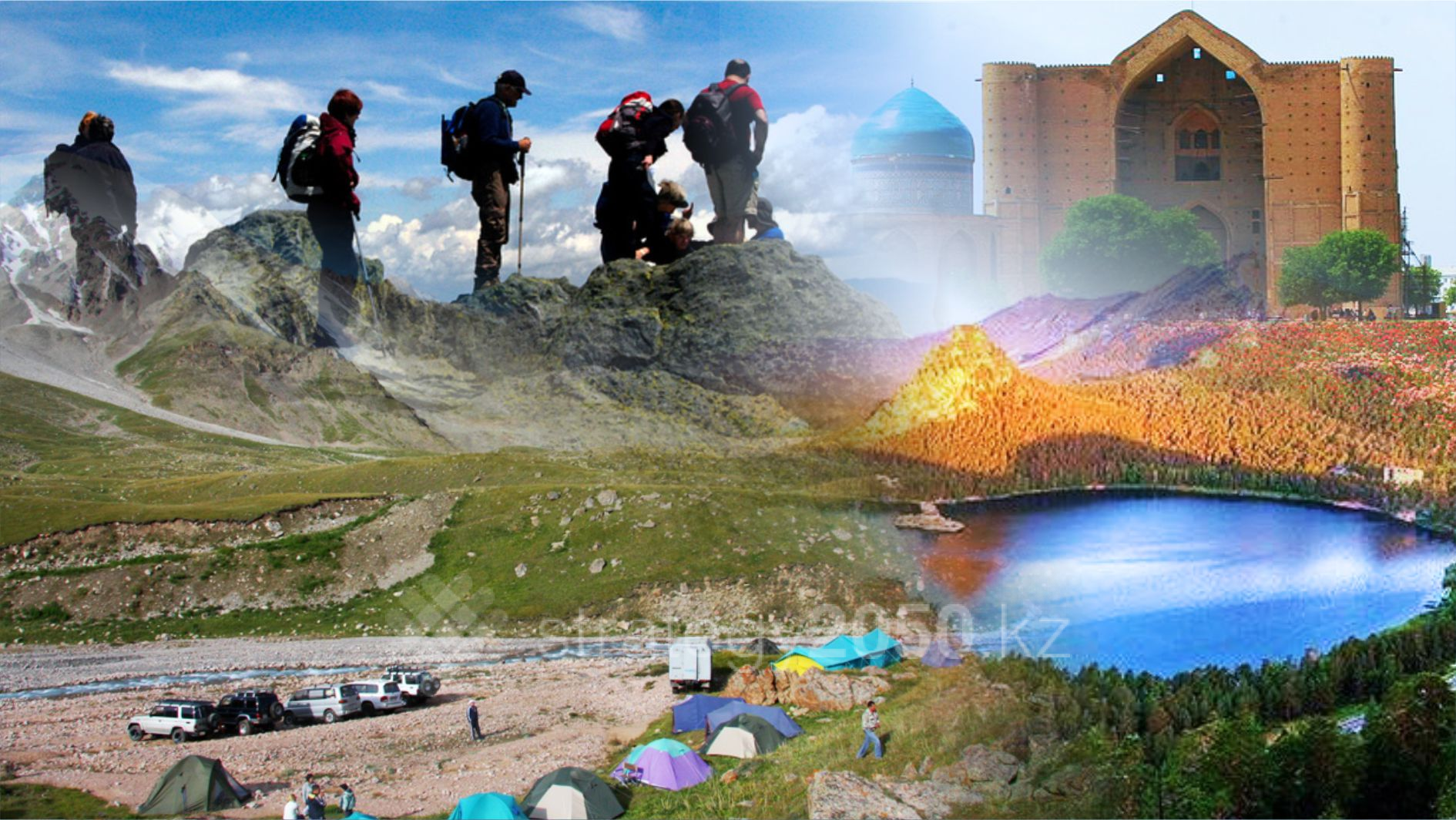 - Urken Serikkaliyevich, tell us about the development of tourism industry in Kazakhstan? How much funds are invested in tourism development? Is this sector lucrative?

- Among the core objectives set by the First President is tourism development. To that end, the Kazakh Government passed a concept to develop tourism in Kazakhstan until 2023. As part of this concept, the Kazakh Tourism national company was founded.

In addition, the 2025 state program to develop tourism in Kazakhstan was worked out, whose achievements, according to preliminary estimates, should include:

investment of 2 trillion tenge in the next 7 years;

over 200 thousand new jobs, including 72 thousand permanent ones;

rise in the number of tourists fr om 7 to 15 million people a year.

It is still early yet to confirm that tourism is profitable. While the share of services in GDP totals 55%, then the share of “Accommodation and catering”, alongside “Art, rest and recreation” is less than 2%. The tourism sector’s revenues come fr om almost one third of the income from export revenue. The income of residents from the stay of foreigners in 2018 stood at 2.3 billion US dollars, 5.6% up compared with 2017 associated with the higher visitor flow into the country.

Despite the fact that tourism is not yet an attractive investment area, the sector’s certain segments gradually on the rise. Take for instance accommodation places. So, accommodation places grew from 2056 in 2014 to 3322 in 2018.  Entertainment sites also increase, new aquaparks, thematic parks and ethnoauls (ethnic villages) emerge.

The state tourism development program calls for the allocation of around 440 billion tenge from the republican and local budgets to infrastructure and other projects, as well as the attraction of around 945 billion tenge of private investment and elsewhere.

We have already had the first investment projects. Just a week ago, Prime Minister Askar Mamin and Culture and Sport Minister Arystanbek Mukhamediuly symbolically laid the first stone at a construction site of a new world-class resort near Aktau. Turkish company Sembol İnşaat (SML) plans to invest over 50 billion tenge in this project.

Such resort projects will keep emerging though a PPP instrument, with the State building infrastructure and business constructing hotels and entertainment sites.

- What about Kazakhstan’s potential in the tourism industry?

- Due to its geographical situation and considerable natural recreational resources and cultural and historic world heritage sites (with 11 UNESCO world heritage sites), unparalleled natural diversity, Kazakhstan has potential to develop new tourist products and all necessary basic preconditions needed to be a big player on the map of world tourism.

At present, our country is an “infant” touristic destination with limited tourism infrastructure, wh ere tourist products and services are scarce and which has little or no representation on the global market of tourism.

An analysis revealed Kazakhstan has over 100 famed tourist sites having the potential to be so-called “tourist magnets” and “tourist growth points”.

However, given resource constrains and the need for much investment in the development of all the sites, the Culture and Sport Ministry selected the most significant tourist sites - the so-called Kazakhstan’s touristification map.

The selection criteria were uniqueness of the site in terms of tourist magnet and growth potential of tourist flow, as well as their historic and cultural advantages. Taking UNSECO sites or the Great Silk Road listed sites, and the sacral sites of the Rukhani Zhangyru Program as examples.

The following top 10 priority tourist territories in Kazakhstan, which have the greatest potential, were set out.

8. The development of beach tourism in Mangystau – with the capacity of 750 000 tourists per year;

9. The development of MICE (Meetings, Incentives, Conferences, Exhibitions – author’s note) tourism in the city of Nur-Sultan – with the capacity of 1 000 000 tourists per year;

These destinations are set out as the key areas to develop tourism, with each having its uniqueness, products/potential for market development.

The draft state program for tourism development sets up these 10 areas as the decisive condition to the development of a modern highly effective tourist complex and the enhancement of contribution of tourism to the Kazakh economy.

- The Government of Kazakhstan has identified 10 steps to develop tourism. Do you think these steps are relevant? How are they being carried out?

This step is on all fours with the appeal of First President of Kazakhstan Nursultan Nazarbayev stated at the 18th congress of Nur Otan Party which is to support children and facilitate their development. Its overall completion will enable 35.2 billion tenge to stay in the Kazakh economy not including a multiplier effect. That is, one tenge of subsidies pumps 4.6 tenge into the economy.

Visa and migration regime liberalization. The step will raise a series of measures from the optimization of the e-Visa mechanism to the expansion of the list of visa-free countries.

Introduction of the TAX FREE system in 2022 as experienced by the EU countries, Australia, Thailand, Singapore and certain CIS countries – Russia, Belarus, Georgia. Which such a step in place, many developed countries saw not only the growth in trade turnovers, but also in flows of shopping tourists.

Compensations from the republican budget, with the possible contribution of the operators such as PremierTaxFree, GlobalBlue, InnovaTaxfree, will be made only at large airports of Kazakhstan – Nur-Sultan, Almaty and Shymkent.

Priority tourist territory. This step will allow for attracting over 200 investment projects totaling 800 billion tenge. Over 60 thousand permanent jobs will be created. That is the concentration of political and financial resources contributed to tourism in the USA, Canada, Turkey and Spain.

New model of management of Specially Protected Natural Areas. Development of protected areas as tourist destinations with the creation of conditions so as to involve businesses in developing tourism infrastructures at protected areas with respect for recreation.

Similar to the development of eco- and hunting tourism in the USA, Canada, Belarus, Tajikistan and Iran, the step will exponentially increase the number of investment and tourists, together with endangered species included in the Red Book.

Constructing sanitation facilities in tourist destinations. As at today, there are some investors willing to collaborate with the Government through a PPP mechanism.

Implementing the compulsory classification of accommodation places using five stars standards from experiences of certain OECD countries, including Spain, Switzerland and Turkey. The OECD draws up appropriate recommendations to Kazakhstan for introducing such a mechanism. This step will be key in terms of improving the service quality and accessibility of tourist products of Kazakhstan, and will need legislative amendments to the requirements for accommodation places.

Entry points and roadside service. It is planned to assign their coordinated development to the Ministry of Industry and Infrastructural Development, which will fulfill the task of the First Kazakh President announced at the 15th Forum of inter-regional cooperation between Kazakhstan and Russia last November to transform entry points into transit and tourist arteries on the Eurasian continent.

Work of guide-interpreters. Due to market demands we intensify control over work of guide-interpreters by introducing compulsory certification mechanisms following EU and OECD countries. The demand in quality specialists in the tourism industry will be addressed by opening of International University of Tourism and Hospitality thus considering innovations in the top 10 tourist major countries such as the USA, Spain, the Emirates, China, and so on. It will train workforce not only for Kazakhstan, but also for Eurasian countries.

Marketing and advertising. It is about comprehensive and systematic promotion of Kazakh tourism both within the country and beyond.

As for foreign markets, we propose to focus on 10-15 target markets as was done in Georgia, Czechia, the UAE. In so doing, the marketing plan setting out the key markets and segments was designed:

3. Active markets – the perspective directions for Kazakhstan such as Japan, the UAE, Malaysia, Singapore, Indonesia, the USA, and others.

Promotion will be undertaken with a focus on the first two groups of markets using all modern communications tools on the principle of push&pull: the “push” strategy through stimulating the demand side and the “pull” strategy – stimulation the supply side.

- What are the popular tourist destinations inside the country?

- Official statistics show last year 4.7 million domestic tourists were recorded, 7% up than a year ago.

If you take a close look, it is evident that the majority of them are business visitors (business trips). Although, this segment is also part of tourism classified by the World Tourism Organization (WTO), while the number of tourists in the classic sense when people travel for rest and recreation purposes is lower. It is necessary to realize many Kazakh citizens prefer to stop over at their relatives’ homes and mates or rent a flat when travelling the country for rest, which heavily affects the statistics. Also, there is a very large segment of domestic “daytime” tourists who travel without overnight stay while using catering and entertainment services. Accordingly, the actual figure on domestic tourism is considerably higher.

For the time being, the number of outbound tourists is almost twice of the domestic tourist flow. Among the main causes along with the lack of due supply and infrastructure is missing information. Citizens of the western regions are unaware of the east and south tourist destinations, and vice versa. Tour operators and agencies themselves fess up that they have not visited the most fames resort zones of Kazakhstan.

So Kazakh Tourism started off conducing infotours for Kazakh tour operators on the most attractive tourist destinations of our country to stimulate supply. The first tour that gathered tour operators from four western regions of the country around Nur-Sultan, Burabay, Almaty, Shymkent, Saryagash and Ust-Kamenogorsk went well at the end of the past month. In follow-up to the first tour, certain participating companies have started selling tours to sanatoriums of the Saryagash, Burabay and Eastern Kazakhstan resorts.

Separate presentations were made on developing the country-specific tourist website Kazakhstan.travel, which is in Kazakh, Russian, English, French, German, Chinese languages and contains fun content for tourists. This year it is planned to add Korean and provide more extensive functionalities for tourism business. Aggregators to book air tickets and hotels will also appear.

As for popular types of rest among Kazakh citizens – first of all comes recreation and beach tourism. In summer time, Kazakh citizens are more inclined to go to coasts of Alakol, Balkhash lakes, the Caspian Sea, and the Burabay resort zone. Statistics show last year over 1 million Kazakh citizens opted for resort zones of the country.

The number of tourists loving adventures and sport is growing. Different bicycle rides, marathons and other sports events attract thousands of participants throughout Kazakhstan. The rising hikes, mountaineering, independent jeep-tours, and so on are of separate notice.

The trend to split vacations (short but frequent mini-vocations) gains popularity worldwide, and Kazakhstan is no exception. Weekend tours around Almaty and Nur-Sultan are fairly developed, focusing on the country’s national natural parks. The number of visitors of protected areas grows every year, with 530 001 people in 2010 and 1 324 362 people in 2018 (870 thousand people – the statistics committee says).

- Thank you for the interview!