IDB plans to step up systemic cooperation with Kazakhstan

During the 14th meeting of the OIC summit on 1 June 2019 in Mecca Kazakh Foreign Minister Beibut Atamkulov met with Dr Bandar Hajjar, President of the Islamic Development Bank Group. 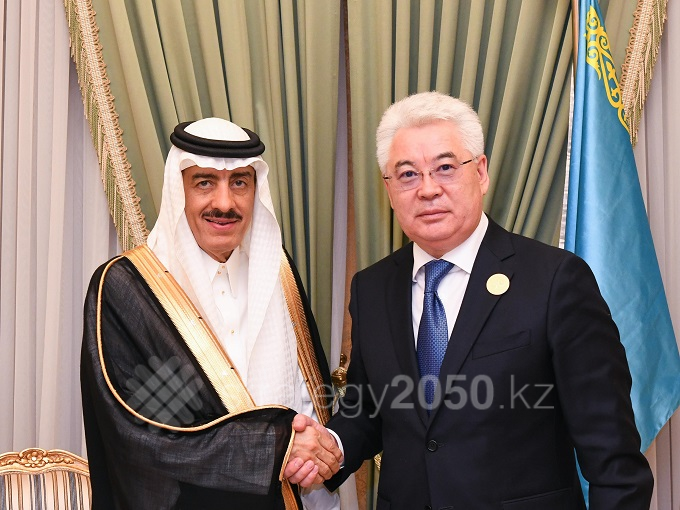 The Bank’s further participation in the national projects in Kazakhstan was discussed at the meeting that highlighted Kazakhstan’s interest in cooperation with the IDB in pursuit of the initiative of first Kazakh President, Leader of the Nation Nursultan Nazarbayev on developing the strategic program document “Islamic infrastructure integration”, aiming at infrastructure integration of ICO member States.

The Bank’s participation in the programs focusing on Kazakhstan’s economic development shows its solid intention to develop cooperation with the country.

“Our goal is to strengthen cooperation with Kazakhstan and develop Islamic financing mechanisms in your country. I call on Kazakhstan to take part in the international conference on Islamic sukuk securities in Luxemburg and send specialists for training under special fellowship programs of the Bank”, Dr Bandar Hajjar said.

The interlocuter informed on the establishment of the IDB Science and Technology Fund with initial capitalization of 500 million US dollars.

The Kazakh side expressed gratitude to the IDB president for active participation in the international events held in Nur-Sultan, in particular the first ICO Summit on Science and Technology in September 2017, the opening ceremony of the Astana international financial center (AIFC) and the Astana Finance Days Forum in July 2018.

The Bank’s cooperation with the AIFC, with Dr Bandar Hajjar being a member of the Center Management Board, was dwelled on. The memorandum on cooperation between the IDB and the AIFC was highlighted to promote Islamic financing in the CIS region and look into the IDB’s valuable experience in this field.

The Kazakh side invited the IDB to actively take part to develop Islamic financial services in the AIFC and assist in encouraging participation by other Islamic financial institutions with the AIFC, including through locating the IDB structures and issuing Islamic sukuk securities on the AIFC Stock Exchange.

Consideration was also given to speed up the ratification of the statute of the International Islamic Finance Corporation by Kazakhstan that will make it possible to attract hefty financial funds to develop exports to the ICO counties.

Food security is globally relevant. Kazakhstan actively works in this area. In so doing, the Islamic Development Bank was thanked for the support, including within the framework of the Islamic Organization for Food Security with its headquarters in the city of Nur-Sultan.

The Islamic Development Bank is an international financial institution which officially commenced operations on 20 October 1975 with its headquarters in Jeddah. All 57 ICO member countries sit on the Bank.

The Bank carries out promising economic projects within the ICO countries through equity investments, providing loans to enterprises and programs either in private or public sectors, as well as establishing and managing special funds whose activities are aimed at providing help to Muslim communities in counties that are not members of the Bank, and others.

Since its establishment, the IDB Group has approved projects within the IOC member counties totaling 1333.3 billion US dollars. In 2018, the IDB financed projects in countries of Africa, Europe, Latin America and Asia.