In a bid to develop economics of simple things and support for export, in Kazakhstan the systematic measures to scale up the share of local content in public procurements are elaborated as well as model contracts on construction and design. This was known at the Governmental session. More on that, read in the piece of the Strategy2050.kz Information Agency. 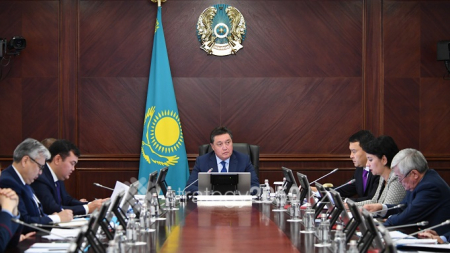 Since 27 March this year, in order to monitor the implementation of the “Development of Economics of Simple Things” program and the active involvement of businesses, the NCE Atameken-based Project Office to develop the areas of economics of simple things has been running involving governmental bodies, regions and development institutions. The Office already held over 300 sessions and around 1000 prospective entrepreneurs’ reports from all the regions were heard.

“Systematic issues were identified as well as systematic amendments were worked out to improve the Program, a part of which was already adopted by the governmental decree. The first package of amendments was introduced on 4 May regarding the roll-out of guarantee mechanisms, an increase in the financing amount of updating of turnaround means from 30 to 50%, and inclusion of such goods as poultry meat and cotton fiber”, Zhenis Kassymbek, Deputy Prime Minister of Kazakhstan, said.

The amendments will allow give support for 270 billion tenge to over 150 enterprises and create over 10 thousand jobs and increase tax receipts to 38 billion tenge, according to the Deputy Prime Minister.

The Office works on the second package of amendments to the Program, that provides for a decrease in the interest rate for the final borrower, fixing the state-supported part. Such an amendment will lower the price of a loan for the entrepreneur and remove arbitration between the programs.

The second package of amendments will introduce a grace period for a loan of not more than 1/3 of the loan period (not more than 2 years 3 months) and introducing new goods for lend under the Program.

According to the Deputy Prime Minster, the Program’s effective implementation will enable to reduce the import share of the goods lent under the Program from 59% to 37%, create over 16 thousand workplaces, and increase tax receipts to 1.1 trillion tenge by 2025.

“To intensify financial and non-financial support to local enterprises 500 billion tenge, including 470 billion tenge at the expense of the Baiterek Holding, will be allocated in the next 3 years”, he said.

Also, Mr Zhenis Kassymbek told that the systematic measures to increase the share of local content in public procurements are elaborated; the Ministry of Finance’s order that from this July sets out the procurement of goods of economics of simple things from only the manufacturers included in the register of qualified suppliers. The sole criterion for being included in the register is the industrial certificate.

The Ministry of Finance with the Atameken national chamber of entrepreneurs worked out the model contracts on construction and design, that include the requirements for the obligatory use of the domestic construction materials register when designing or procuring construction materials. This June they will be fully implemented into the legal framework.

“In an effort to implement the roadmaps to develop the light, food and furniture industries, as well as construction materials production, that were passed 5 March, the key performance indicators on local content are elaborated for governmental bodies and regions”, Kassymbek said.

In order to ensure procurement from domestic manufacturers, the regional commissions to control local content operate. Their mandate for goods of economics of simple things was enlarged. Their objective is to control and monitor procurements’ plan, the share of local content and inform the Government about the results every week.

At the end of the session, Kazakh Prime Minister Askar Mamin noted that the concessional lending program is progressing well, expressed his support for the approach proposed, and instructed the Ministry of National Economy together with the interested governmental bodies, national banks and the Atameken national chamber of entrepreneurs to introduce a draft to further improve the Program, the interested governmental bodies and managing holdings to take measures to increase the share of goods and services procured in the economics of simple things, and the Governor’s offices to upgrade work in this area within the local content control commissions.

“In regard with the support for non-primary exports, the work to fully and timely utilize the funds allocated to support non-primary export must continue. In this context, I task the Ministry of Infrastructure and Industrial Development together with the Baiterek Holding to give proposals to improve the mechanisms for promoting non-primary exports”, he said.

It should be noted that pursuant to the instructions of first Kazakh President Nursultan Nazarbayev, voiced in the Address to the people of Kazakhstan on October 5, 2018, 600 billion tenge was allocated for the development of the “economics of simple things”. On December 11, 2018 the Government Decree adopted a program of preferential loans for priority projects.