President of Kazakhstan Nursultan Nazarbayev took part in a ceremony dedicated to the presenting of state awards and prizes, the press service of Akorda informed. 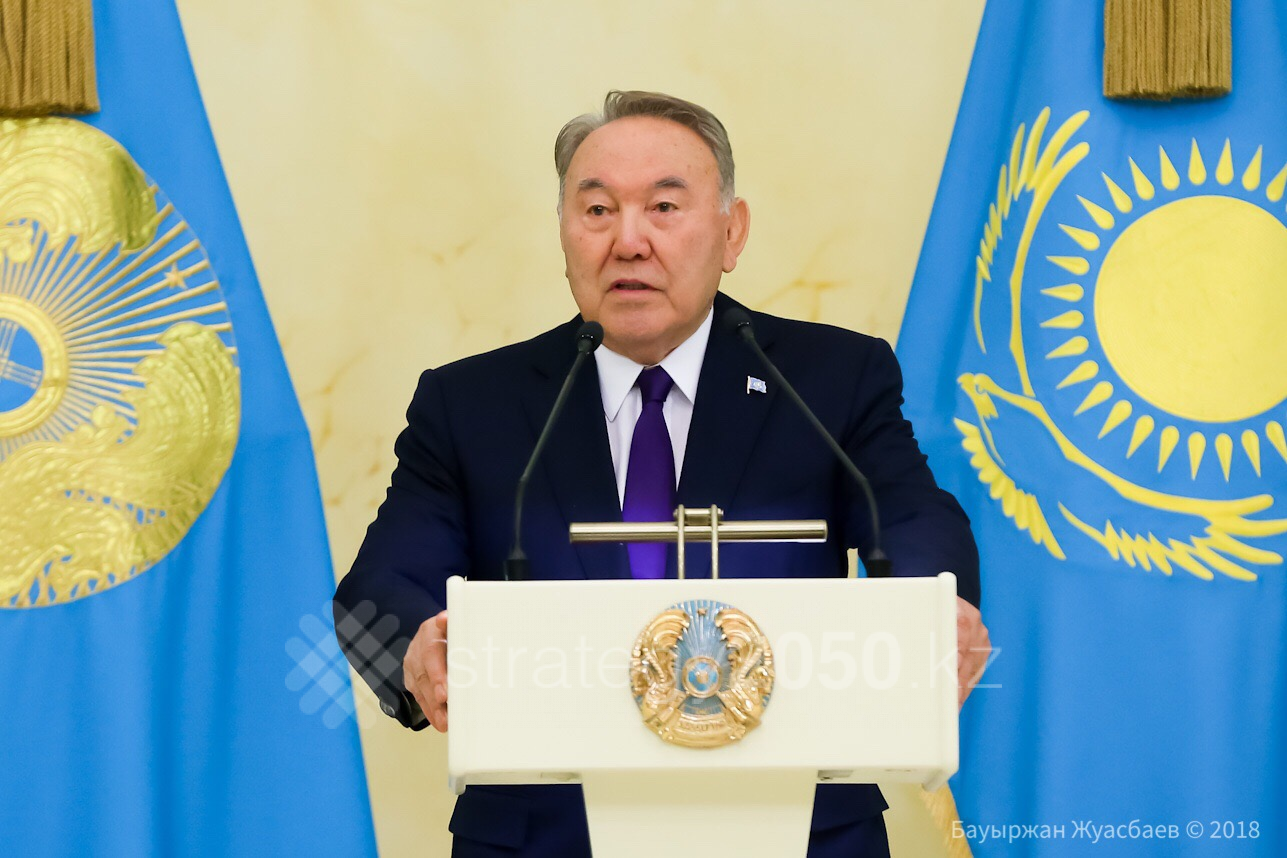 Addressing the participants of the ceremony, the Head of State congratulated those present on Independence Day and noted that this landmark event opened up impressive prospects and unique opportunities for the development of new Kazakhstan.

“We have created a strong and stable state, striving to become one of the 30 most developed countries in the world. Moving along the path of progress, we have achieved great success in many areas and directions. These accomplishments became possible due to the efforts and creative energy of all Kazakhstanis”, Nursultan Nazarbayev said. 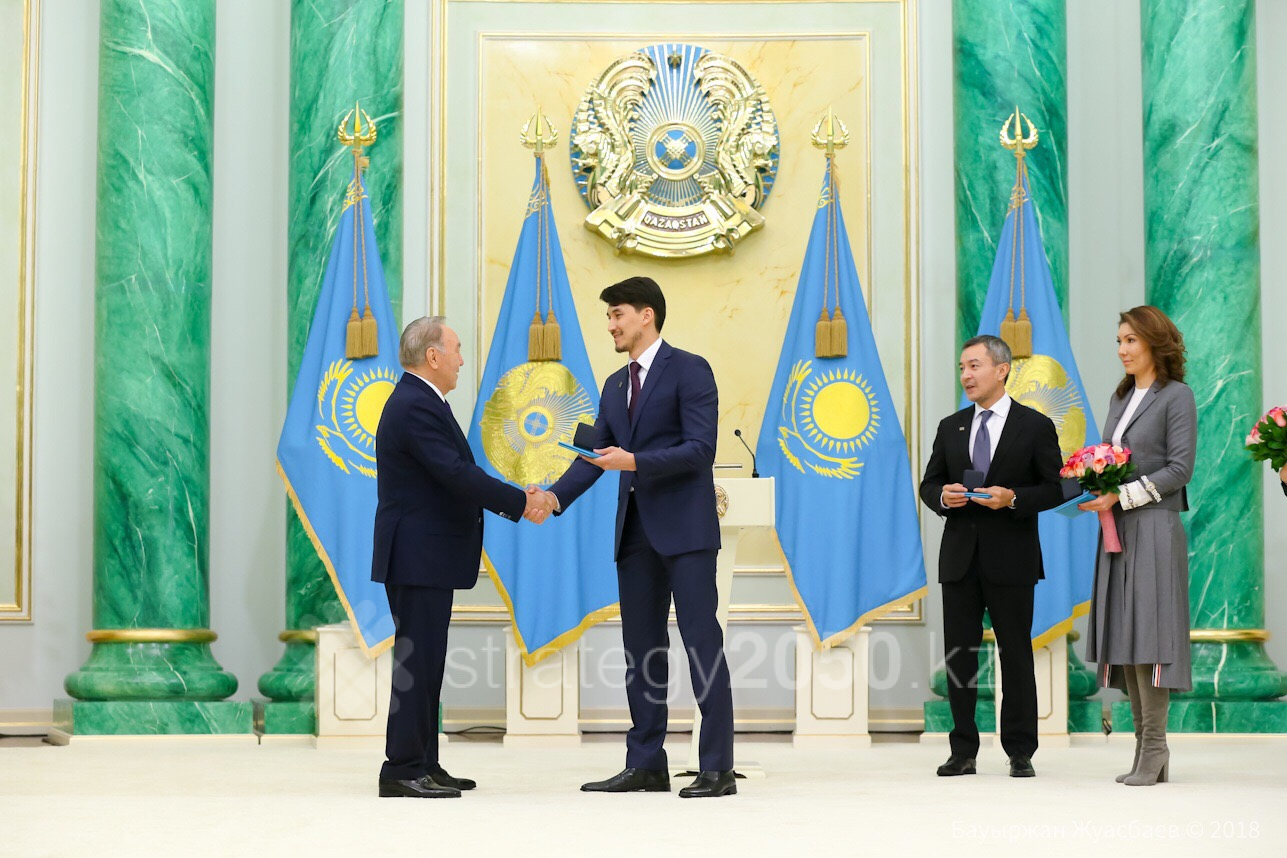 The President of Kazakhstan stressed that the state annually honors with awards and prizes the special contribution of its citizens to the prosperity of the Motherland, and pointed out that only the most outstanding people who have achieved high professional peaks and recognized by people in society are honored with this sign of attention. 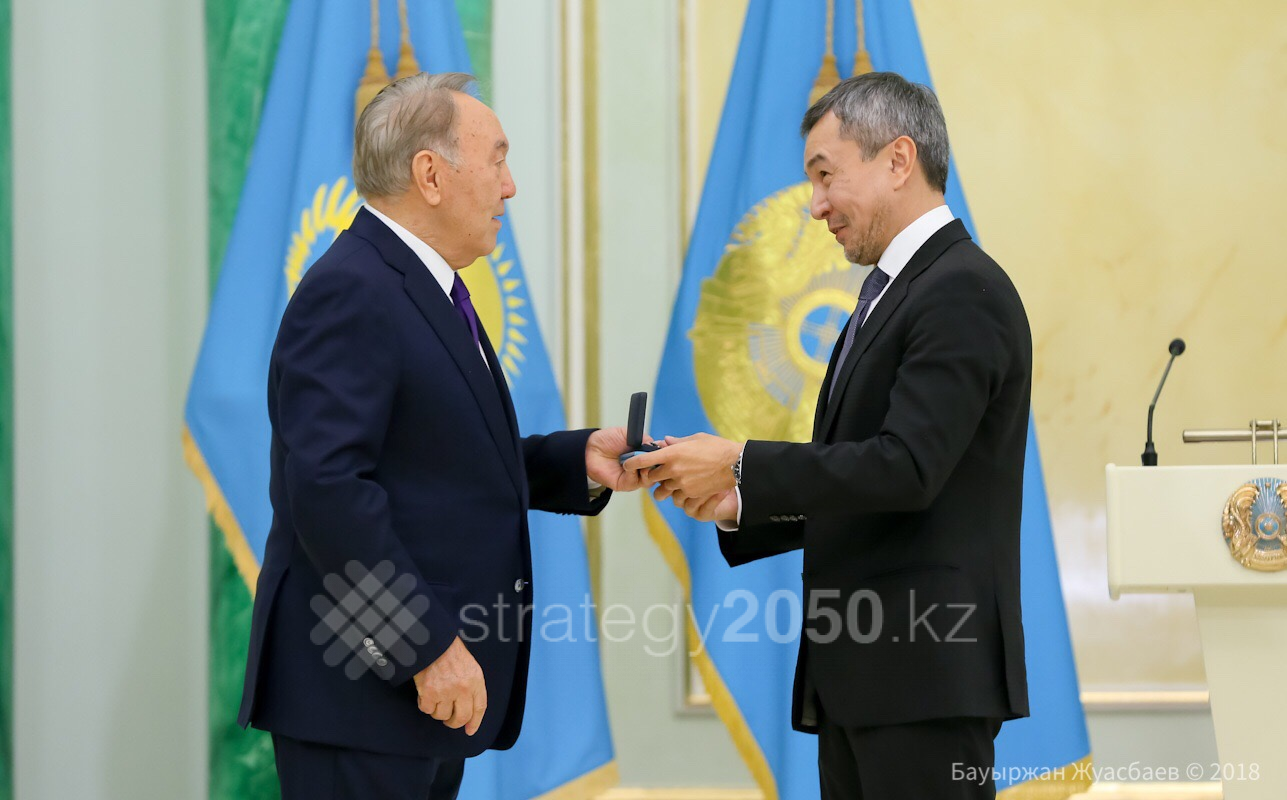 “You are a vivid inspirational example of selfless service to the cause, exceptional diligence and sincere patriotism for our younger generation and all citizens of the country. Your achievements deserve the highest praise of the state and the recognition of the people”, Nursultan Nazarbayev stated.

Kuralai Baimenova, Chairperson of the Civic Association of the Center for the Support of Paralyzed Citizens of Aktobe, Sairambai Donenbayev, Head of Shaushen Farm in Turar Ryskulov district, Zhambyl region, Solovyeva Alina Robertovna, a teacher of the Pushkin School-Gymnasium №1 Municipal Institution in Shymkent were awarded with the highest distinction - the title of Kazakstannyn Yenbek Yeri (Hero of Labour of Kazakhstan) for the outstanding achievements in the economic, social, and human development of Kazakhstan, and social activism. 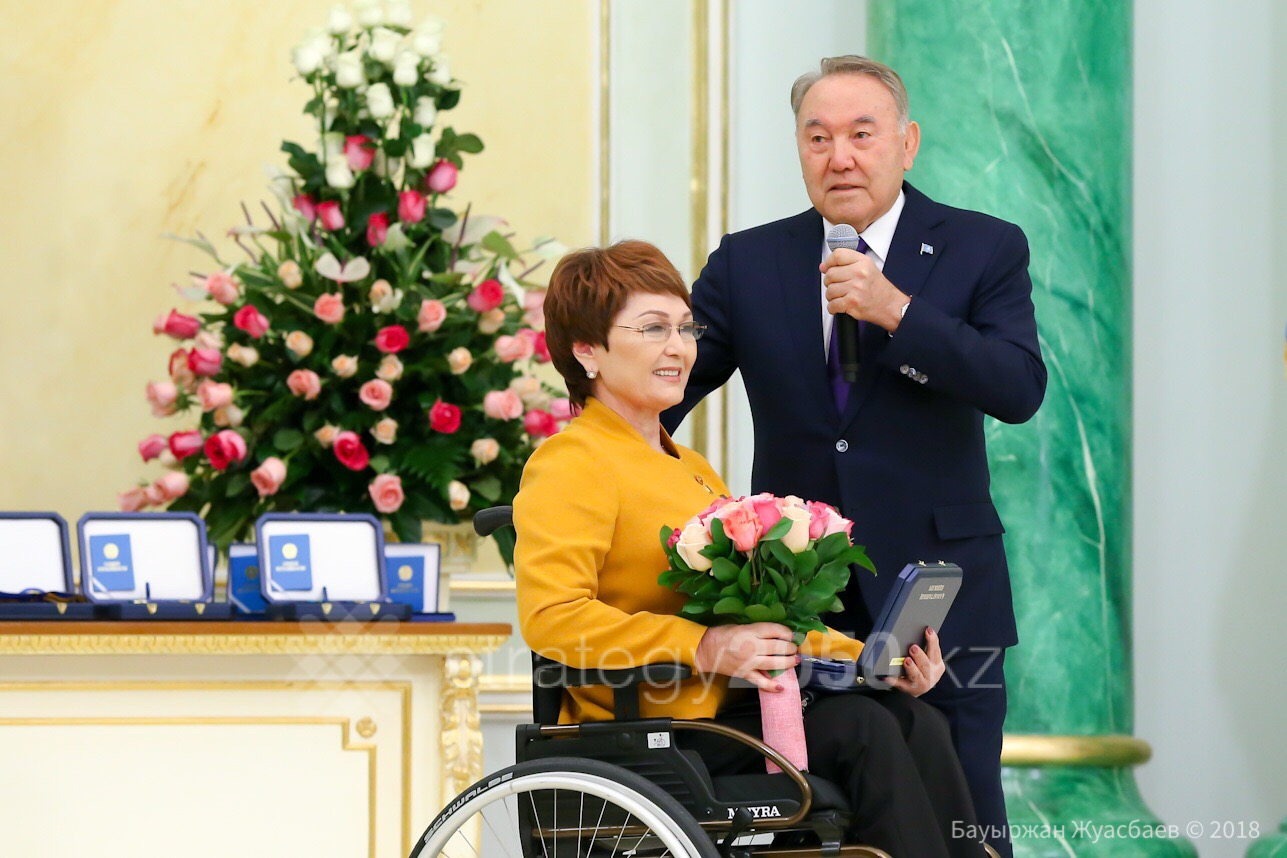 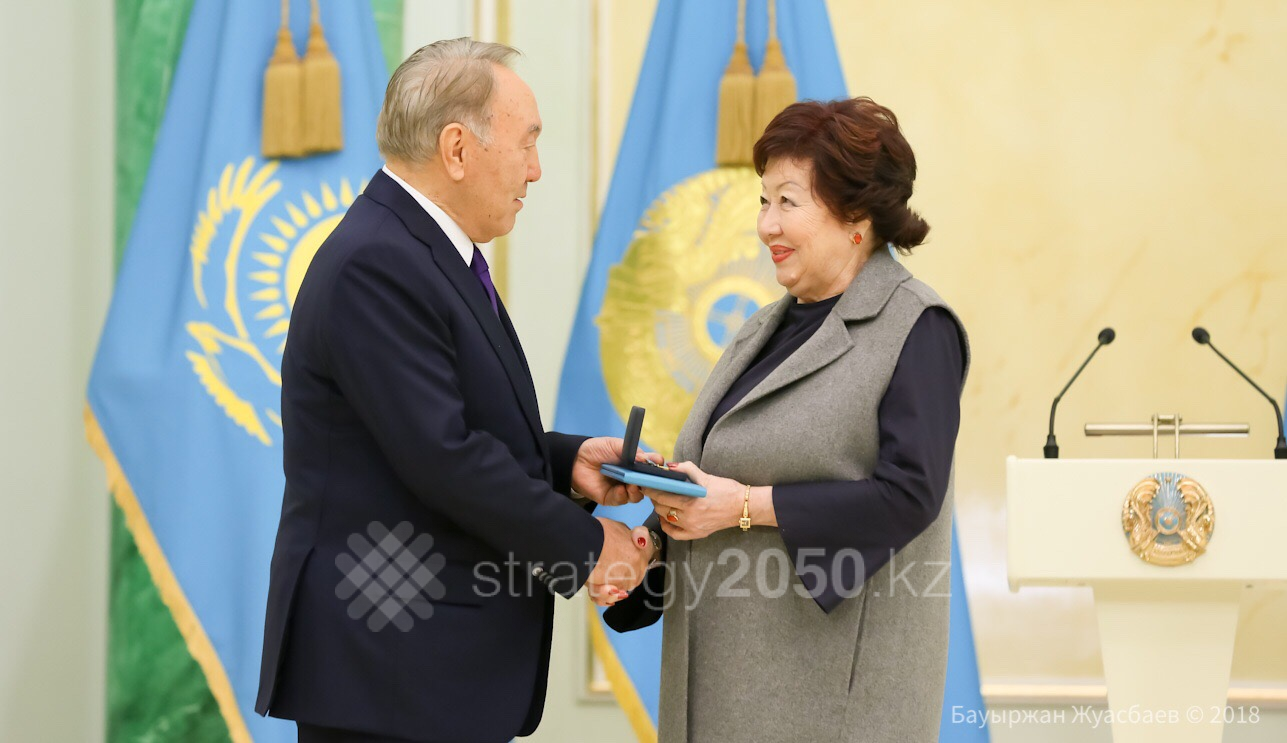 The Order of Barys, Class I, was bestowed upon Zhanibek Karibzhanov, a veteran of labor (Astana), and Sauat Mynbayev, Chairman of the Management Board at Kazakhstan Temir Zholy NC JSC.

Abai Baigenzhin, Chairman of the Management Board at the National Scientific Medical Center JSC, was awarded the Order of Barys, Class II. 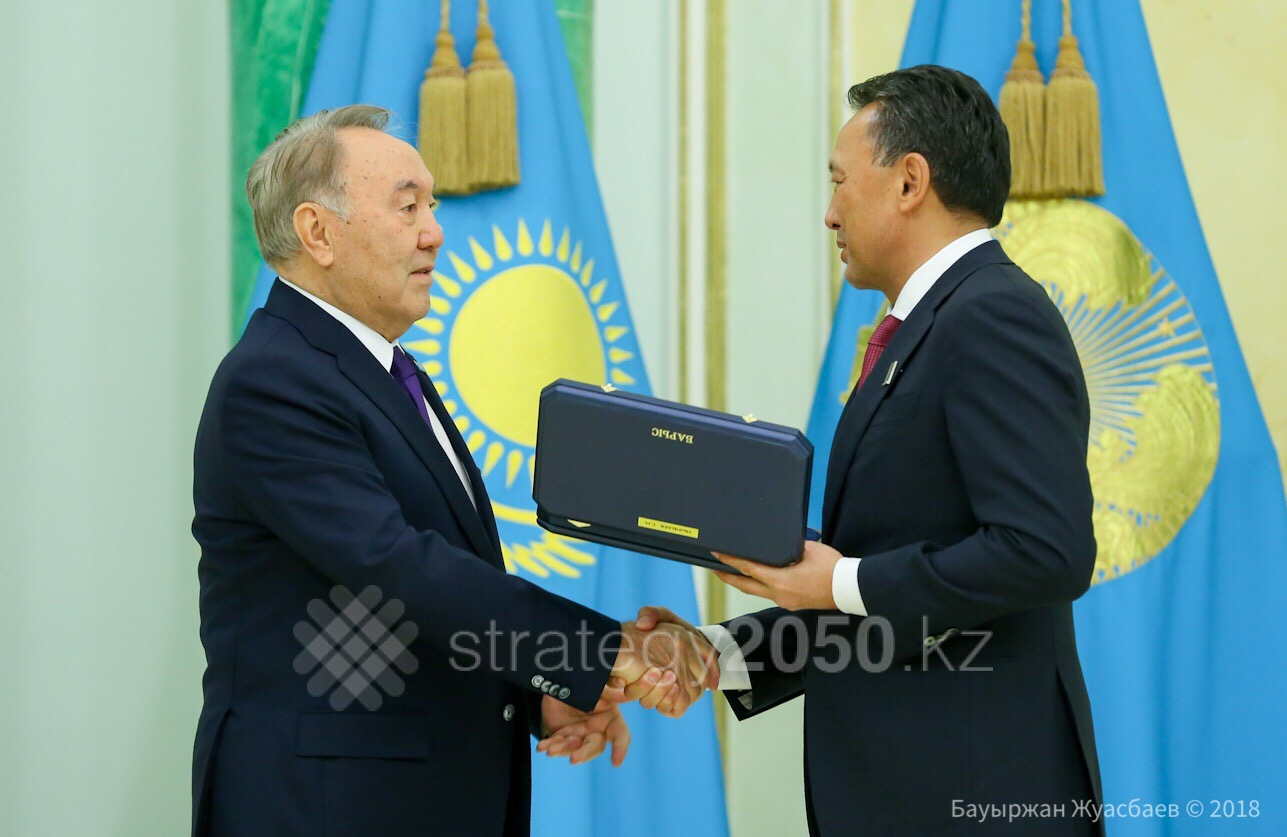 “All his activities are related to medicine. I have known him for a very long time. He has made a significant contribution to the successful establishment and development of the leading healthcare institutions in our country”, Nursultan Nazarbayev said.

The Order of Barys, Class II, was also conferred on Kabdesh Zhumadil, a writer (Almaty), and Sultan Orazaly, a professor at the Kazakh National University of Arts (Astana).

Presenting the Order of Aibyn, Class II, to inspector of road patrol police of the Department of Internal Affairs of Astana Azamat Baltabayev, the Head of State noted that people having heroic professions are always ready for feat in the name of safety and peace of our citizens.

Yermekbek Pazliyev, a commander of the branch of the specialized fire department No. 2 of the Emergency Department of the Ministry of Internal Affairs of Kyzylorda region was awarded with the Order of Aibyn, Class III, for his heroism and courage in saving people’s life.

The Head of State noted that among those awarded are scientists, culture and art, education and health, industrial workers and entrepreneurs, military personnel and law enforcement officers, labor veterans, athletes and government officials.

“Today we are honoring the best of the best - the true patriots of their homeland, who give all their knowledge, energy and strength in the name of the country's prosperity and the growth of the welfare of our people. Thanks to your loyalty to the profession, hard work and courage, you have gained deserved authority among colleagues and recognition of our entire society”, the President of Kazakhstan said.

Giving the highest award in the field of literature and art to poets Tynyshtykbek Abdykakimov, Akushtap Baktygereyeva and Utegen Oralbayev, Nursultan Nazarbayev noted that spiritual modernization and harmonious development of the creative potential of our citizens are important priorities of the country.

The award was also given to the following persons for “Abai” Opera: Head of the opera production team Toleubek Alpiyev, soloist Sundet Baigozhin, and Director of the Astana Opera House Galym Akhmedyarov.

For exemplary fulfilment of military and official duty, courage and dedication, shown in maintaining law and order, strengthening the national security of the country, the orders of “Dank” (Order of Glory), Class II, and the medal “Zhauyngerlik Yerligі Ushіn” (Medal of Courage) were awarded to a group of military personnel and law enforcement officers, including head of the Department of the National Security Committee in North Kazakhstan region A. Akshayev, Deputy Minister of Defense M. Altynbayev, Prosecutor of Almaty B. Zhuiriktayev, commander of the Military-Air Forces of Air Defense Forces of the Armed Forces of Kazakhstan D. Kossanov, squad leader of the guard of honor of “Aibyn” Presidential Regiment” of the State Security Service A. Torebekov. 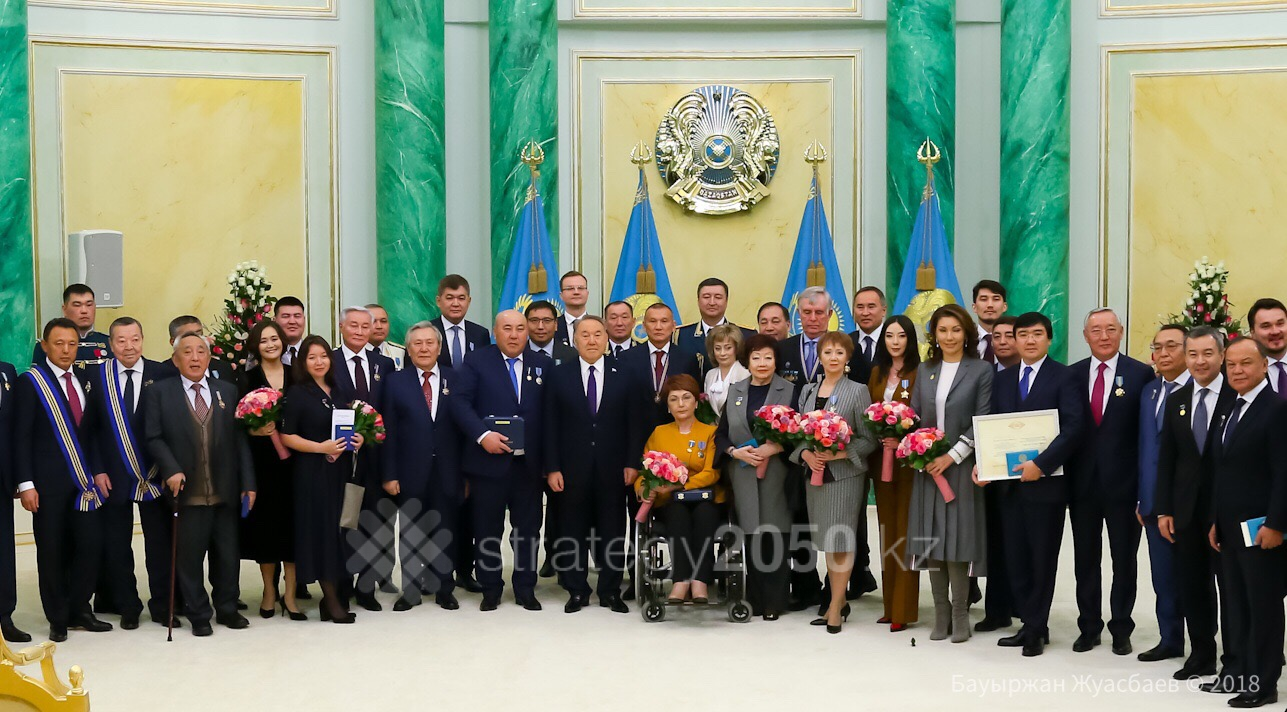 In conclusion, the President of Kazakhstan noted the symbolic character of the presentation of the state awards and prizes on the eve of the country's main holiday, Independence Day.

“I am sure you deserved this high appreciation of the state and you’ll continue to create for the benefit of the people of Kazakhstan. You are followed by our youth, who you inspire new achievements and deeds! The security and well-being of our Motherland rests on your strong shoulders! Be always worthy of this high and noble mission!”, Nursultan Nazarbayev wished.