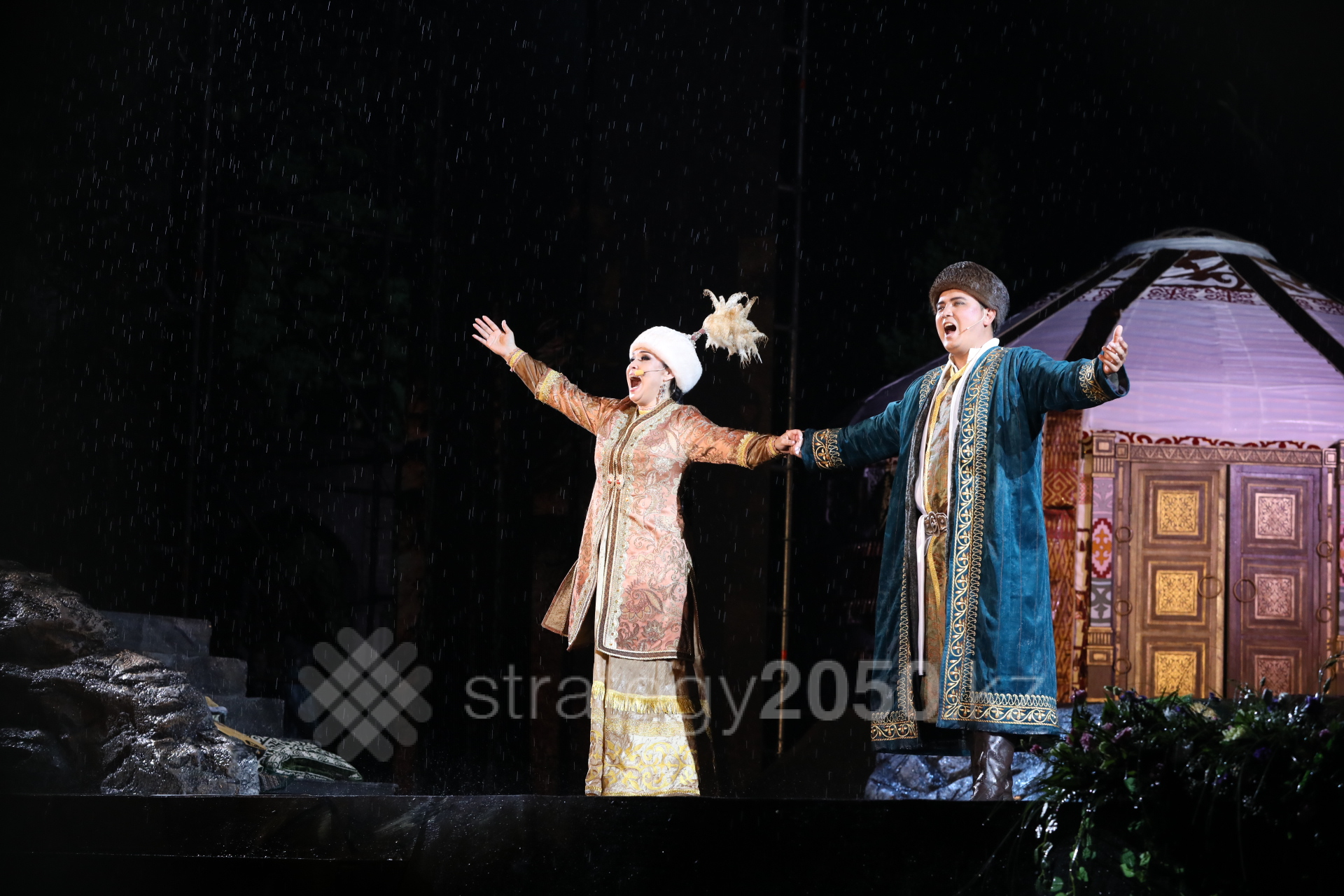 Visiting Akmola region, President of Kazakhstan Nursultan Nazarbayev attended the “Birzhan-Sara” theatrical performance by the “Astana Opera” Theatre. The Kazakh classical opera art show was held in the format of open air at the foot of the Kokshe mountain in Borovoye and it was sold-out. All this became the brightest demonstration of the possibilities of the Shchuchinsk-Borovoye resort zone. Read about it in the review material of the “Strategy2050.kz” information agency’s journalist.

Akmola region has been glorious by its unique beauty of nature since ancient times. The greatest akyns - Kazakh folk poets and singers - Birzhan sal, Akan sery, Baluan Sholak, Ukili Ibray were born there. Among them, a special place in the heart of the people is taken by Birzhan sal, whose works raised the national art to a new level. And it is very symbolic that on the eve of the celebration of the 90th anniversary of Birzhan sal district foundation and the 20th anniversary of the capital of our Homeland, the name of unsurpassed steppe akyn Birzhan sal resounded on Akmola land.

Mukan Tulebayev’s opera “Birzhan-Sara” was chosen because it is the real property of the Kazakh opera art. It was decided to stage the performance in Borovoye in order to give greater authenticity and to show the uniqueness of Kazakhstan's nature.

The starry sky, the smell of pine needles and gentle breeze created a special atmosphere. The entire performance was permeated with the spirit of nature. The words of Birzhan, praising the beauty of his native land, gave the work an exalted tone and epic scope.

The massive stage was installed plumb bellow the sky. It was preparing for several days. Decorations, illumination, musical equipment, acting props, costumes were brought from Astana.

All dramaturgy, featuring the exclusive to date ideas of the production group, as well as the scenic solutions of the production were preserved. However, the theatrical specifics were conditional, and the experience of the open-air performance opened up new possibilities: Birzhan, as it was written in the score, song its aria from afar, the forest acoustics give special fresh colors to singing, and nature itself was part of the scenery. The audience saw the stunning waterfall, which impressed everyone at the opera house, and the scene of the fair, which excited the audience’s imagination, in the course of which Birzhan song about the beauty of Kokshetau, its mountains, rocky gorges and mirror lakes. Nevertheless, the main thing was the great music, beautiful voices of soloists and harmonious sound of the orchestra.

“Birzhan-Sara” is a dramatic performance. It is a story about two lovers who cannot be together. Sara is destined to be married to rich landowner Zhienkul. Birzhan, a humble guy, tries to resist but in vain. Traditionally, the opera ends with the death of the protagonist, but the directors decided to modify the ending and leave the light at the end of the tunnel, so that the audience understood that the love sacrificed was not in vain.

Any open air performances are accompanied by a risk associated with the weather. In the midst of the performance the sky burst into a shower but it did not stop the actors. The sky seemed to cry, experiencing all the scenes of the performance. The organizers of the event prepared for such a situation. Raincoats were given to all viewers.

“Creative performers are very optimistic. Despite the weather they know why they came here. They are rehearsing the third day, it’s raining, even though they are rehearsing with pleasure. Every creative person carries a mission, he wants to show his art, what he has learned and for which he receives gratitude from people. I'm sure that the weather will not change, the creative staff will be happy to perform, and maybe even this will give a drive”, Arystanbek Mukhamediuly, the Minister of Culture and Sport of Kazakhstan, said before the performance.

Principal Soloists of the “Astana Opera” were preparing to perform the leading roles: Birzhan –laureate of many international competitions Meir Bainesh, Sara – Honored Artist of Kazakhstan.

It should be noted that the project was implemented by the Ministry of Culture and Sport of Kazakhstan in conjunction with the “Kazakh Auenderi” JSC.

For reference: the premiere of the “Birzhan-Sara” opera took place on October 7, 1946 at the Kazakh Theater of Opera and Ballet named after Abay. The “Astana-Opera” Theatre has staged the play this spring for the first time.