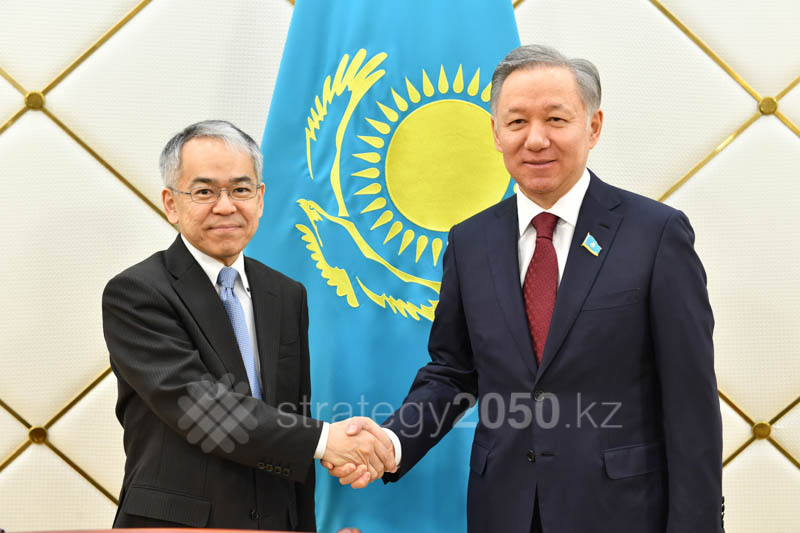 Chairperson of the Mazhilis, Nurlan Nigmatulin, met with UN Permanent Coordinator in Kazakhstan, Norimasa Shimomura, the press service of the Mazhilis informed.

Having noted a quarter of a century long cooperation of our country with this organization and its institutions, the Speaker of the Mazhilis stressed that President of Kazakhstan Nursultan Nazarbayev put forward all his key international initiatives speaking at the UN tribune.

Norimasa Shimomura noted that the history of the successful Kazakhstan's interaction with the United Nations is reflected in the achievements of our country. At the same time, the UN Permanent Coordinator stressed that radical changes occurred in Kazakhstan in 25 years are the merits of President of Kazakhstan Nursultan Nazarbayev and his strategic course.

The interlocutors paid special attention to the membership of Kazakhstan in the UN Security Council in 2017-2018.

“This is important not only for present but also for the next generations of Kazakhstanis”, N. Nigmatulin said.

In turn, N. Shimomura called the non-permanent membership of our country in the UN Security Council is natural because Kazakhstan declared itself as a successful country, as a country that has earned the trust of the international community and became a defender of the world without nuclear weapons.

“It is not only honorable but also and very responsibly because it depends on the adoption of such decisions, which affect people's lives”, the UN Permanent Coordinator noted.

At the same time N. Shimomura stressed that in this direction Kazakhstan has made tremendous progress, especially in the period of his presidency in the UN Security Council.

According to N. Nigmatulin, our country attaches great importance to the implementation of the UN Sustainable Development Goals. This contributes to the system implementation of the instructions of the Head of State for ensuring a high level and quality of life of the population, and will also allow Kazakhstan achieve OECD indicators and become one of the 30 most developed countries of the world.

The speaker of the Mazhilis also noted active cooperation with the deputy corps of the UN Development Program, which provides expert assistance in working groups when discussing bills.

At the end of the meeting the interlocutors called for further development of cooperation.