The President of Kazakhstan met with Minister of Healthcare Yelzhan Birtanov, the press service of Akorda informed. 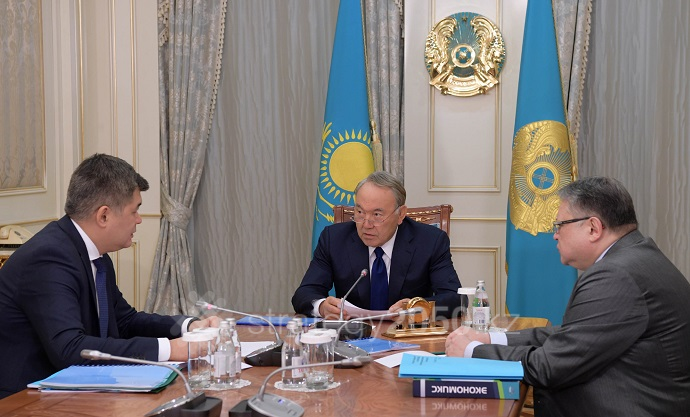 During the meeting, the Head of State was presented with an interim report on the implementation of the state health development program "Densaulyk" and information about the fulfillment of the tasks assigned to the Ministry.

The President of Kazakhstan noted the importance of the disease prevention and stressed the role of citizens in the formation of the healthy nation.

"It is necessary to attract citizens to strengthen their own health. The human health depends on medicine only 10-15%. Everything else depends on a person himself", Nursultan Nazarbayev said.

The Head of State dwelled on the issue of promoting a healthy lifestyle among the population and focused on the relevance of the task of increasing the life expectancy of Kazakhstanis on average up to 80 years old.

In turn, the Minister of Healthcare informed the President of Kazakhstan about the improving of the basic indicators of the public health.

"In all respects, the situation is stable. The life expectancy increases. The maternal mortality tends to decrease. The infant mortality also declines for several years", Yelzhan Birtanov said.

The Minister of Healthcare spoke about the measures taken by the Ministry to improve the health status of the population and pointed to the importance of identifying diseases at an early stage.

Ye. Birtanov also reported to Nursultan Nazarbayev on the results of taking measures to improve the quality of primary health services provided and the introduction of digital technologies in the healthcare system.

During the meeting, the Head of State separately dwelt on the issues of the state regulation of prices for medicines and the fight against corruption in the pharmaceutical industry.

"After my assignment to deal with the prices, the head of the Pharmacy Committee and the management of the company "SK-Pharmacy" have been brought to justice. The heads of the health departments of five regions have been detained. As a result of illegal actions with contracts, the prices for medicines are unjustified", the President of Kazakhstan said.

Nursultan Nazarbayev instructed to ensure the timely implementation of assigned tasks and organize appropriate control in the field of public health, including the procurement of medicines.

The Head of State also recalled the personal responsibility of Ye. Birtanov for the supervised industry.