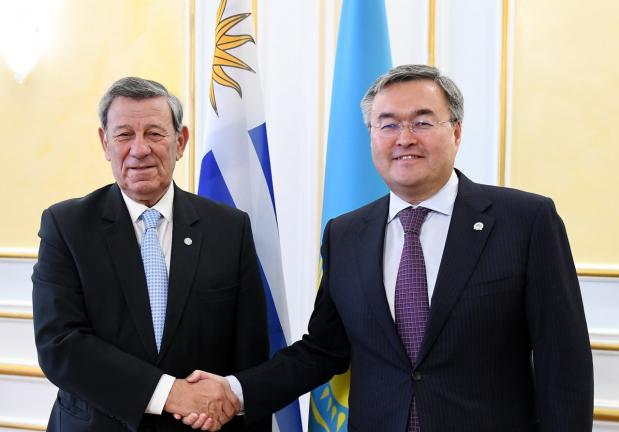 During the talks, the Ministers noted the positive dynamics in the development of Kazakhstan-Uruguay relations, discussed pressing issues on the bilateral agenda, stated the need for further development of the political dialogue, and exchanged views on major international and regional issues.

The parties focused on the importance of enhancing cooperation in the trade, economic and investment spheres, emphasizing the prospects for the development of cooperation between the Eurasian Economic Union and MERCOSUR, as well as in the framework of the “One Belt - One Road” Initiative.

The Foreign Minister of Kazakhstan, drawing attention to the favorable conditions created for foreign business, called on the Uruguayan side to implement joint projects in the field of agriculture and exchange experience in the field of healthcare and tourism. In order to build contacts between people and bring cultures closer, the parties agreed to facilitate the signing of relevant visa liberalization agreements.

The Ministers also expressed interest in deepening the dialogue in a multilateral format. The parties noted the importance of continuing constructive cooperation on pressing global security issues within the UN framework, with particular attention to the non-proliferation of nuclear weapons and the fight against international terrorism.

In turn, R. Nin Novoa reiterated the desire of Montevideo to further build constructive and mutually beneficial relations with Nur-Sultan and invited the head of the Kazakh Foreign Ministry to visit Uruguay.