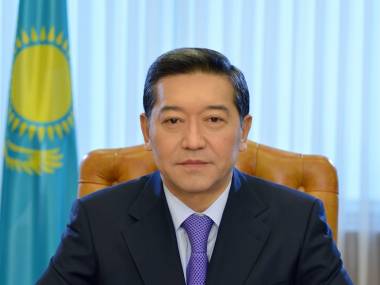 The Prime Minister said that "the Head of State set the task to reduce the consumption of energy by 10% every year until 2015. In order to achieve this goal there was a task to develop and approve the program "Energy Efficiency 2020" by September 1 of the current year.

Vice Minister of Industry and New Technologies Nurlan Sauranbayev delivered a keynote speech. According to him, "in the field of energy efficiency there were created the preconditions for the transition to energy-efficient economy, the necessary legal framework was formed. 22 legal acts were approved in the process of implementation of the new Law "On energy saving and energy efficiency".

The Vice Minister focused on the areas of the program "Energy Efficiency 2020" and reported on the measures to implement it. In particular, more than 3,000 energy standards have been approved. Classes of energy efficiency for buildings and energy-using household devices are introduced in Kazakhstan.

According to Sauranbayev, 16 regional and 5 sectoral energy saving plans are under implementation. 11,712 entities were included in the list of subjects of the State Energy Registry. Among them are 727 industrial enterprises, 2,938 state-owned enterprises, and 8,000 government agencies.

Prior to July 2015 more than 2,000 industrial enterprises must undergo energy audits. The Ministry of Industry and New Technologies puts a special emphasis on the industrial sector, since the industry consumes more than 50% of the country's energy resources.

As part of the program "Energy Efficiency 2020" it is planned to implement 78 different activities to the amount of more than 1.1 trillion tenge. Thus, 145 million 624 thousand tenge is allocated from the national budget, 9 billion 830 million 936 thousand tenge from the local budget, and 1 trillion 177 billion 153 million 52 thousand tenge of extra-budgetary sources (own investment funds of enterprises).

In conclusion, Sauranbayev expressed confidence that "the success of the program will give a serious impetus to the modernization of the economy and increasing the welfare of the population."

First Vice Minister of Regional Development Kairbek Uskenbayev focused on the issues of energy saving in housing and public utilities sector. He noted that in the framework of the program on modernization of housing and communal services for 2011-2020 the renovation of houses with thermo-elements was underway. It will allow to reduce heat consumption by 30 percent. In 2014-2016, it is planned to conduct a comprehensive survey of 892 boilers with capacity from 1 to 100 Gcal / h.

According to the Presidents instruction, the construction of three energy centers in the cities of Astana, Almaty and Aktobe is underway. The purpose is to create a platform for the demonstration and promotion of energy-saving and energy-efficient technologies and materials.

Summarizing the discussion, the Prime Minister stressed the importance of the program and noted that "energy efficiency stimulates innovative solutions, development of science, transfer of new technologies. It shows more examples of energy efficiency in industry, utilities, transportation."

"All central, local agencies need to intensify efforts to promote energy efficiency, to teach our people, to show them what energy saving gives," Serik Akhmetov said.